You’re not going to learn a lot chained to a desk, says Marie O’Connor 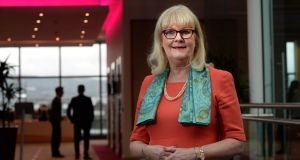 Marie O’Connor: “If women want to rise to the very top they need to put themselves in a position where they are taking responsibility for entire business units and not just restricting themselves to particular areas.” Photograph: Dara Mac Dónaill

Employers aren’t telepathic, and women who want to succeed in the workplace need to tell their bosses where they think they need to go next in terms of gaining experience, according to Marie O’Connor.

O’Connor, who recently retired from PwC Ireland where she spent more than 40 years, said while most employers were now keenly aware of the benefits that diversity could bring to their businesses, some could be blinded by so-called “benevolent biases”.

“Failure to speak up can lead to women losing out because their employers wrongly assume there are things they might not want to do, such as spending time gaining experience overseas.”

Speaking to The Irish Times, Ms O’Connor, who previously led PwC’s asset and wealth management practice and who has spent time serving as a director for State bodies such as IDA Ireland, said women needed to be proactive in shaping their careers.

“The world of work is very different from when I started, with many more women working and more of them in senior roles. I think most businesses have moved way beyond paying lip service to diversity to actively seeking to embrace it, but they need women to stand up and be heard.”

Ms O’Connor has certainly never been shy about seizing the moment. From Clonskeagh, Dublin, her working life began in an era in which women were expected to leave their jobs after getting married, and in which legislation requiring equal pay was only just being introduced.

To even get a foot on the ladder she had to be proactive. She was the first woman to be accepted into the business studies course at the then College of Commerce (now part of the Dublin Institute of Technology). After graduating, she joined PwC and quickly rose through the ranks to become its first female partner and one of the first at any of the State’s accountancy practices.

We meet in the wake of a series of explosive revelations concerning men’s exploitative and abusive behaviour towards women in the workplace. Whether it be in entertainment, politics or business, it has been quite a week. O’Connor, however, says her experience of being in what was once a male-dominated company was positive.

“Things that were acceptable 40 years ago are certainly seen differently now, and any attempt to stamp out unacceptable behaviour is welcome.

“Having said that, I can’t say I ever experienced any troubling behaviour or heard of other colleagues facing problems in my early years. If anything I had a lot of assistance and encouragement to get ahead.

“I never found it a lonely place when I became the first female partner for some time within PwC either. It seemed like a natural step for me to be made one at the time and, while it did surprise some of our clients, they were mainly curious.”

One important lesson that O’Connor says she learned early on was to get out and network. She may not have been invited out to the golf course too often but that did not stop her from making herself known.

In addition to time spent abroad working in Toronto, Canada, with a couple of young kids in tow, back in Ireland she made sure to turn lunchtimes to her advantage by getting out and meeting as many people as possible.

It was a smart move, with O’Connor being invited to join a number of boards – not too surprising given her experience working to help encourage inward investment to Ireland.

“In fairness, there was a concerted effort to get more women on State boards at the time so I gained from that, but once on them I had to knuckle down and show what I could do.

“Of course back then we had no idea that what we were doing would eventually lead to the IFSC, but it was an exciting time and a great example of government and business working well together.”

As someone who has sought to set a good example and serve as a role model to others, O’Connor is keen to stress the importance for women of not just restricting themselves to roles in so-called “softer” areas such as HR and marketing.

“A desk is a dangerous place from which to view the world and you’re not going to learn a lot if you stay chained to it. The same goes for staying in one’s comfort zone. If women want to rise to the very top they need to put themselves in a position where they are taking responsibility for entire business units and not just restricting themselves to particular areas.”

1 Should I switch bank now with Ulster Bank at risk of closing?
2 Will brother’s widow get half of our parents’ estate when they die?
3 Tick all the right boxes when it comes to your house insurance
4 Belfast mailbox address used by account holder in Russian money-laundering scheme
5 Swiss drug giant Roche pays €380m for Irish biotech Inflazome
6 EU watchdog calls for end to Covid loan payment breaks
7 FinCEN Files: Dublin business features in leak of US treasury documents
8 Aldi empire wracked by family feud
9 ‘I just thought it sounded exciting and different’
10 Finance Ireland refinances mortgages with low level of payment breaks
Real news has value SUBSCRIBE