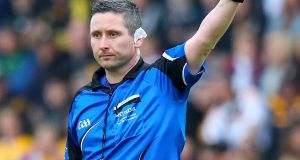 All-Ireland hurling final referee and postman Fergal Horgan says he is “devastated” by news that he is to lose his job as part of the latest round of An Post cutbacks. File photograph: Oisin Keniry/INPHO

All-Ireland final referee and postman Fergal Horgan says he is “devastated” by news that he is to lose his job as part of the latest round of An Post cutbacks.

Horgan, who featured prominently in an RTÉ documentary last Monday night about All-Ireland hurling final day, was told in recent days that he is one of a number of people to be let go from December 1st.

The father of four who lives in Knockavilla in west Tipperary with his wife and family and is based at the Thurles post office, has been working as a postman for two years.

“We heard a month ago but only got confirmation last week about who was going or who was staying,” he said. “It was very badly handled.”

His postal round covers The Commons area near Ballingarry and is mainly a rural route. “It suits me because I start early in the morning, at 5.30, and finish at 1 o’clock in the day. It suited me down to the ground. [I meet] lovely people. Rural people are always easy to manage. You might get your cup of tea off them and talk to them for a while. The older people love to see you coming to have a chat.”

An Post informed staff last month that 8 per cent of staff will be cut — 319 nationwide — with three or four to be let go from the Thurles office. “I’d be the third-last person in, so I’d be on the list,” Horgan said.

“Devastated,” was his reaction. “To be let go the first week of December. We have four small children, where would you get a job the first week in December? It’s very poor form by An Post.”

The 38-year-old previously worked as a tree surgeon but said that line of work has dried up since the recession. “People aren’t spending money on trees any more.”

He doesn’t expect any reprieve from An Post in relation to the job losses. “We’ll be on a list if people are out sick or on holidays, but that will be only sporadic work. You’d be depending on people to be out sick.”

As for securing another job, “Hopefully in January I might pick up another job.”

The cuts mean that the 40 postal rounds currently serviced from Thurles will be reduced to 37, with the remaining delivery workers having their routes slightly expanded. “People won’t lose their post, they’ll still get their letters. Probably a bit later in the day. But that’s a very important part of it in rural Ireland, that you check in on older people and I feel that connection could be lost with the way they’ve gone.”

A spokesman for An Post said the job losses nationwide were the result of a Labour Court recommendation which included the payment of a 2 per cent pay rise to staff in return for “a broad range of cost savings” including the reduction in staff in An Post’s mail collection and delivery operations. There is a further pay rise of 1.5 per cent planned for 2018, depending on the delivery of more cost savings.

“An Post is restructuring its whole business and adapting to the rapid changes in mails and retailing - most particularly the decline in traditional letters, the growth in online shopping deliveries and the move away from traditional cash payments. The company is gearing up to take full advantage of the opportunities emerging in an increasingly digital world.”

Asked if the job losses could have been handled better, the spokesman said in a statement that details have been agreed with An Post’s trade unions and “we are dealing directly with the staff involved”.