Women belong where decisions are made, Be One Inspire One event hears 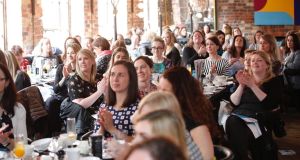 Be One Inspire One event attendees cited unconscious bias and failure to be credited for work done among their concerns in relation to equality in the workplace.

The timing of women’s networking event Be One Inspire One in referendum week couldn’t be more apt, for Alison Cowzer, managing director of The Company of Food.

“I can’t think of a better week to be in a room with 100 women. If we were sitting here 100 years ago, we wouldn’t have the right to vote,” she said, encouraging attendees to make sure to use their vote on Friday.

Cowzer, who is also chairwoman of Women for Election, a group campaigning to increase female representation in the Dáil, said she liked this quote from US supreme court justice Ruth Bader Ginsburg: “Women belong in all places where decisions are being made.”

The Temple Bar panel event, hosted by The Irish Times and sponsored by Ulster Bank, was designed as an opportunity for “mingling, motivation and mentorship” over breakfast.

Joyce Walsh, head of learning and development at Ulster Bank, noted the “glacial progress” in the fight for equality in the workplace. Girls who outperform boys in school and university often find that “things start to change” when they begin their careers.

Unconscious bias, failure to be credited for work done and the tendency of women to be “eager” for other people’s projects rather than “having your own space” were among attendees’ concerns.

“We have to consider saying no sometimes,” said Sarah Keane, president of the Olympic Council of Ireland and chief executive of Swim Ireland. “But I think it’s more than that. Are you being used? Or are you getting support back?”

Frankness ran through the speeches by a panel of five high-achieving women. Keane implored attendees to grasp opportunities as they became available. “For women in particular, I’m not convinced we ever feel ready.”

Ellen Kavanagh, chief executive and creator of wax brand Waxperts, highlighted the importance of loving what you do. “I know it’s not every girl’s dream to be ripping out people’s hair,” she joked, “but I was good at it.”

Her inspirational moment came when she realised the world of waxing, having seen few developments since the 1970s, had become “the ugly duckling of the beauty world” and there was space for her products to disrupt the industry. “It’s an unusual passion, but it is my passion.”

Author and actor Claudia Carroll said her experience of auditioning for roles had taught her that “rejection isn’t the worst thing”. In acting, it is a fact that only one person can get the part. Writing is different, she said, as everyone has their own voice, and the battle is to carve out time to get it done. Her preference is to work early in the morning, “when there isn’t that white noise of social media”.

While acting roles have traditionally tended to dry up for women once they reach the age of 40 – “like a tap being turned off” – Carroll has been encouraged by the number of prominent Hollywood women who have “taken matters into their own hands” and set up production companies. The same thing is starting to happen here, she said.

“Change is coming, but it is coming very slowly.”

The risks and rewards of going out on your own were also exemplified by Oonagh O’Hagan, the managing director and owner of Meaghers Pharmacy. At the age of 26, she wanted to buy a pharmacy she had previously worked for on Baggot Street, but to do so she had to match an IR£2 million offer from an international chain.

At the age of 26, “with no money” and some student debt, O’Hagan walked into a bank with a business plan, “not having known what a business plan was two months earlier”. She “gave it socks”; they gave her the money.

While there have been some “really dark days”, especially in the wake of Ireland’s financial crisis, and she said she often feels like she is “winging it”, the biggest risk she took was walking into her bank branch that Monday morning.

Building a team of smart and talented people to support you is critical, O’Hagan said. “Sometimes you need other people to believe in you, because you don’t always believe in yourself.”

Cowzer looked forward to the day when women running businesses was not seen as something exceptional. “We’re kind of led to believe that you have to be exceptional to be a woman running a business,” she said. “Women in business should not be a ‘cause’. It should be normal.”

1 Boeing identifies new software flaw in grounded 737 Max
2 Should I sell the old family home to allow children buy apartments?
3 Big Phil battles to repair transatlantic links
4 Dublin housebuilder records €11m gain after striking deal with bankers
5 Construction body calls for loan scheme to help first-time buyers
6 ‘Life in Vilnius reminds me of Ireland in the 1990s’
7 Festive season boosts footfall at Arnotts and Brown Thomas
8 The ‘gangster’ superior, the Irish priest and the wealthy widow
9 Real price of cheap credit? Unaffordable homes
10 Irish people like nothing more than being bribed with their own money
Real news has value SUBSCRIBE