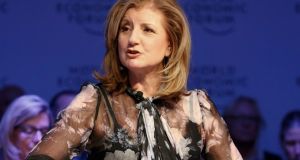 ‘Mindfulness proponents do not get much bigger than Arianna Huffington’ Photograph: Reuters/Ruben Sprich

Not that long ago, an almost unknown American academic named Andrew Hafenbrack was sitting in a Berlin hotel room, idly scrolling through his emails after a day at a leadership conference, when he got a horrible shock.

A study he had just published had been denounced in an article jointly penned by Arianna Huffington and a leader in his field, the neuroscientist Richard Davidson. Worse, the New Age guru Deepak Chopra had urged his 3.28 million Twitter followers to read their piece. Phil Jackson, the US basketball coaching great, said his 864,000 followers should do the same.

Prof Hafenbrack (Twitter followers: 471) was stunned. “I had just never seen this happen before,” the 32-year-old told me, recalling how the event had left him feeling “kind of shocked and stressed out”.

I am not surprised. Prof Hafenbrack’s research had nothing to do with race, IQ or any of the other topics that stir academic strife. Instead it poked a hole in an idea that has been embraced with rising enthusiasm in the world of work: the benefits of mindfulness meditation. In a paper he wrote with another behavioural scientist, Kathleen Vohs, Prof Hafenbrack compared people who had meditated for up to 15 minutes with another bunch of study subjects who were asked to just read the news or let their thoughts roam.

When the two groups were asked to do typical work jobs, such as write a business memo, the meditators performed the tasks just as well but did not feel like spending as much time or effort on them. In other words, mindfulness seemed to be demotivating.

As the researchers wrote in the New York Times, this was bad news for workplace mindfulness proponents. It suggested that, even if meditation improves mental focus, the benefits might be cancelled by demotivation.

Mindfulness proponents do not get much bigger than Ms Huffington. The founder of the Huffington Post news site and the Thrive Global wellness business has been meditating since she was 13. She complained that Prof Hafenbrack’s study looked at only people who did a one-off meditation session for a matter of minutes. Studies showing the “host of benefits” of workplace mindfulness had been based on people meditating for several weeks or more, she said.

Prof Hafenbrack says it is fair to ask if a study of veteran meditators might have produced different results, though he points out his research was based on a widely accepted definition of the state of mindfulness.

Either way, it seems perfectly valid to question what he calls the “impossibly positive” slew of meditation research, not to mention the ballooning growth of mindful products. One can now buy mindful Airbnb tours, mindful mayonnaise and mindful yoga pants.

In the US alone, the meditation market was worth an estimated $1.2 billion in 2017, when government figures show 14 per cent of adults were meditating, more than three times the share five years earlier.

Given that meditation rooms have sprouted everywhere from Google to Goldman Sachs, I am glad to see mindfulness studied in the office.

As it happens, Prof Hafenbrack does the odd spot of meditation himself and does not want HR departments to chop mindfulness rooms on the basis of his work, not all of which has been negative. An earlier study showed meditation can improve decision-making by encouraging people to cut their losses sooner, or reduce sunk-cost bias. Other scholars think meditation can lower stress and boost creativity.

I have always been too useless at sitting still to try meditation but I have enough friends who swear by it to think it helpful. I have no reason to doubt Ray Dalio, founder of the world’s biggest hedge fund, when he says meditation was the single most important reason for his success.

But perhaps meditation at work is better at some times than others. Maybe we should try it when we have to decide on whether to throw good money after bad and ditch it when we need the drive to finish an urgent report.

The point is, we need more scholars like Prof Hafenbrack to shed light on the mindfulness juggernaut. Slamming his work is unhelpful and I have to say, it does not seem very mindful at all. – Copyright The Financial Times Limited 2019.