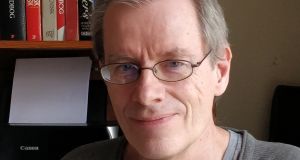 Billy O’Shea: ‘Beers are famously expensive here, costing around €10 per pint, but rents are not as high as in Dublin.’

Ireland was no place for young “adventurers” in the 1980s so musician Billy O’Shea left for Europe, settling down in Copenhagen.

Having completed his Leaving Cert in 1975, O’Shea, who is originally from Shannon in Co Clare, had gone to Trinity College to study economic and social studies.

“That was before they put the B for business into the course. I enjoyed Dublin, but didn’t really take to college life, so I quit after the second year of a three-year degree course, took some time off and then got a job as a sound man at RTÉ. ”

O’Shea said he operated the boom mikes on the flagship Late Late Show as well as numerous sporting events and live shows.

“It was the late 1970s, early 1980s, but sadly Ireland was a depressing place and I wanted to go elsewhere. Irish people of my generation were emigrating at a staggering rate. They mostly favoured the UK, Australia and the US, but I decided to try Europe first.”

O’Shea ended up picking grapes in France and working the docks in Amsterdam, before he ended up in Copenhagen with nothing but a packet of biscuits to his name. “Despite my bad start and pitiful financial situation, I took a shine to the place and decided to stay.

“I had played folk music at home before I came and brought my guitar to a pub called Lades Kælder, which was popular with the few Irish people who were living here.” After playing a few nights, he was offered a gig and a 20-year career as a working musician followed.

“I worked in bars across town. There were no Irish pubs back then, but there was a desire for live music, so I was at the start of something. I even had U2 in the bar one night on their way to make the video for New Year’s Day.”

Despite his enjoyment of playing live music several days per week, he wanted to learn Danish fluently and work more sociable hours.

“I decided to go to school again to learn Danish. It wasn’t like an Irish school- – more a school for adults and I sat the Danish school-leavers’ exams.”

He went on to complete an MA in English at the University of Copenhagen, receiving a gold medal from Queen Margaret II of Denmark for his dissertation on translation theory.

“Since completing college in the late 1990s, I’ve been a professional writer and translator. I have also published three novels, which are currently being translated into Chinese.”

O’Shea translates books, technical guides, and government documents. “My customers also include universities, film and TV companies, state institutions and large enterprises in Denmark. It’s a great job and it suits me. I do enjoy music but after having three daughters, working from home was just a more suitable way to raise a family, though I still do the odd gig here and there.”

“You feel like you are looked after really well. We pay high taxes and health insurance, but we get a lot back. My daughters who are in college are getting an income from the government. So they don’t just get free college, but money too.”

O’Shea says, due to the coronavirus, the country had six weeks of lockdown in spring. “Until now, Denmark has got off lightly, though figures are going up and the second wave is coming, so that could change.

“It’s an interesting place here in the sense that people never do too well or too badly here. It’s not like Ireland where things are much more up and down.”

He says, the cost of living, especially drinking and eating out is high, but there are surprise deals too.

“Beers are famously expensive here, costing around €10 per pint, but rents are not as high as in Dublin. We live in a place, which is the equivalent of Rathmines and pay around €1,000 for a 90sq m apartment. But we get a good deal.

“People love to rent here because you have much more security. Often you form a co-op with other people living in your apartment block and buy the apartment over time, via the rent you pay.”

O’Shea says he also appreciates Danish honesty. “I think over 30 years I’ve lost my wallet three times, and gotten it back each time – with everything in it. It’s something you get to really appreciate when you live here,” he says. And there’s more.

“There are no traffic jams, everything just flows.”

But, there are also growing trends, which cause concern. “Racism has become a much bigger issue than it was when I landed here. There aren’t even many immigrants in the country, much less than in Ireland, but attitudes are overwhelmingly negative.

“I’ve also noticed that winters are getting shorter. We used to have lots of snow and freezing cold, but now it’s warmer, which is beneficial to a burgeoning cafe culture, but certainly not so much for mother earth.”

Despite living in Denmark now for almost four decades, he still misses Ireland. “We used to spend a lot of time in Kerry, and I miss the mountains, the rivers, the pubs, the music and the banter. I go home as much as I can, but not since Covid-19.

“But Denmark has its merits. It’s a great place for Irish people to emigrate to, as the community has grown over the years.”

Anyone looking to relocate from Ireland, should learn the language, he suggests. “If you’re here for a year or two, then it’s fine if you don’t but otherwise it will make a huge difference.

“Danish is a difficult language to learn – the hardest of all Germanic languages, and yet everyone speaks English. I know people who have survived here for 20 years without it, but it’s definitely worth learning if you want to immerse yourself into the culture and have better job opportunities.”

You can have a great life in the heart of Europe, O’Shea says, even without the rugged green cliffs and pubs from home. “I’m here for almost 40 years so I’m here for the duration and I’m very happy with that.”