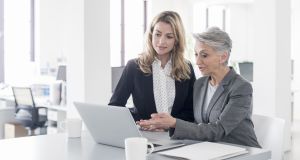 When done successfully, reverse mentoring can be an eye opener for both sides. Photograph: iStock

“You can’t teach an old dog new tricks,” the old saying goes. But those in the vanguard of the growing trend in reverse mentoring would beg to disagree. In a traditional mentoring relationship, a younger person learns from someone older and wiser. In reverse or reciprocal mentoring, the older person taps into the mindset and the often superior tech skills of the twentysomethings and thirtysomethings working in their organisations.

When done successfully, reverse mentoring can be an eye opener for both sides. The rookies get up close and personal with key decision-makers and learn why things happen as they do while the seasoned manager gets a different perspective on their organisation and the world of work from a pair of fresh eyes. Managers can also use the process to gain insights into the possibilities of technology from so-called digital natives and to understand the strengths and job expectations of their younger staff.

The term “generation gap” has never been more relevant than it is today with up to five generations working side by side – from the baby boomers born between the mid-1940s and the mid-1960s to Generation Z, who were born after 1995. That’s a huge life experience gap to plug, not least because technology has changed the working environment so much since the baby boomers got their first job.

Reverse mentors typically come from Generation Y. This means they were born roughly between 1980 and 1990, so they’re not workplace newbies still wet behind the ears. They are around long enough to have built business experience but they are also innately comfortable with living life online in a way that their older colleagues may not be.

Younger generations trust technology to provide information and solve problems. Older generations are more cautious because they grew up in a world where technology did less, was less reliable and its penetration was largely confined to office environments. As a result they can be the ones who need hand-holding when it comes to understanding the potential reach of the digital age.

Reverse mentoring generally follows the traditional format of face-to-face sessions but it is less one-sided. It’s more like a bridge-building exercise between the generations and more of a dialogue where the conversation can range from integrating new digital communications tools to discussing what younger people believe the world of work should look like. Like conventional mentoring it happens at regular intervals. The agenda can be set by either side.

The sceptics with a long career behind them may assume they have little to learn from someone way down the pecking order. But for organisations that want to attract talent and stay relevant, tuning into trends and what those new to the world of work see as motivating and important is vital because it’s not the same as it was even a decade ago.

“Reverse mentoring is a two-way street,” says Mary Harrison, chief executive of business training and support company, Optimum. “The results can be tangible and invaluable in helping today’s leaders to drive a stronger and more robust business and providing tomorrow’s leaders with an opportunity to experience a view from the top.”

Knowing how younger people think is also highly relevant for any organisation that wants to stay in business. They are a legitimate and growing customer segment whose buying behaviours and consumption patterns are influenced by very different factors to those at play when the baby boomers starting earning enough to become consumers. Look no further than changing attitudes to personal transport. To previous generations learning to drive and buying a car was a rite of passage. It’s becoming far less so for those whose concept of mobility is being shaped by ride-hailing services, robo taxis and car sharing.

Jack Welch, the long-time former chief executive of GE, was an early pioneer of reverse mentoring. But while it’s been around for about a decade, it has begun to catch on more recently with companies such as Microsoft taking the plunge back in 2014.

It’s no real surprise that a business technology company should be an early adopter but its buy-in underlines where the big wins potentially lie. Younger people are simply more tech-savvy and, as a result, more blue sky in their thinking when it comes to how technology can manage new audiences and shape the future or could be applied to solve old problems or replace dated ways of doing things.

As with any mentoring relationship, reverse mentoring needs its ground rules and both sides can benefit from some training in the process before they begin. Trust, transparency and a willingness by both to learn are essential but, with a bit of effort, reciprocal mentoring has numerous upsides, from closing the generation gap and improving diversity in the workplace to transferring knowledge and allowing senior managers to identify future leadership talent.

It’s also a good way of getting to know staff and it’s worth mixing up the relationships and putting people with and from different backgrounds together.

“The concept has really evolved as a result of multigenerational workforces within organisations,” Harrison says. “Initially, it was driven by the need to be on top of cutting-edge technology. Now it is about sharing thoughts, insights, raising questions and getting to understand each other. Closing the generational gaps and gaining an understanding of what each generation values and how best to communicate more effectively with them is critical to future success.”