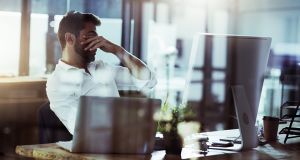 Workplace stress is a highly complex problem, fraught with “psychosocial risks”, according to the ESRI. Photograph: iStock

In recent weeks, two illustrious bodies have flagged problems with the Irish psyche. The OECD told us that 18.5 per cent of Irish people have a mental health disorder and that mental health problems are costing the economy more than €8 billion a year, while the ESRI reported that work-related stress here has doubled over the past five years.

These are not abstract numbers. They represent real people with real problems, and many of them are part of the Irish workforce. As such, these reports should be of major concern to employers who have a role to play in trying to make things better.

Apart from the headline-grabbing numbers, the ESRI’s report also made the point that workplace stress is a highly complex problem, fraught with what its author, Helen Russell, describes as “psychosocial risks” including high levels of emotional demands on workers.

Tackling the big offenders such as bullying, harassment and unreasonable workloads is an obvious place to start, but people’s mental wellbeing – and consequently their resilience and ability to deal with things – is often improved by surprisingly small steps that employers can take to create a friendlier working environment.

These improvements can be subtle, and some – such as positive reinforcement – can be at the “touchy-feely” end of the employer-employee relationship, where not all managers feel comfortable. But even simple things, such as ensuring the heating works properly in the winter, can have a big effect on how people feel at, and about, work, and can pay off in terms of positive attitude and fewer sick days.

Physical infrastructure such as office design, personal space, sound-deadening, good ventilation and adequate light all have a big impact on how happy people are in their working environment. Get it wrong and there are consequences.

For example, overcrowding typically leads to defensive behaviour and poor interpersonal relationships, as people have to protect their patch.

Open-plan offices, once the epitome of progressive thinking, are no longer flavour of the month, as it turns out that people talk less and this can contribute to feelings of isolation. Open plan can also compromise employees’ ability to focus and, when people can’t concentrate, they cope by disengaging from their colleagues and so are less willing to collaborate.

This type of open-plan office behaviour was analysed in a July 2018 study (The Impact of the “Open” Workspace on Human Collaboration) by Harvard Business School associate professor Ethan Bernstein and researcher Stephen Turban, which showed the impact of open plan on employees’ face-to-face, email and instant messaging (IM) interaction patterns.

“Contrary to common belief,” the authors say, “the volume of face-to-face interaction decreased significantly (by about 70 per cent) with an associated increase in electronic interaction. In short, rather than prompting increasingly vibrant face-to-face collaboration, open architecture appeared to trigger a natural human response to socially withdraw from office-mates and interact instead over email and IM.”

When there is constant distraction in the workplace, people’s cognitive and emotional resources are depleted as it requires so much effort just to stay focused. As a result, stress levels go up, productivity goes down and people become more error-prone.

Many businesses need collaborative working environments to thrive, but this needs to be balanced with breakout or quiet spaces where people can get away from the buzz and have both visual and audible privacy. There is also ample evidence that where people work in an aesthetically pleasing space and/or have access to soothing features such as an exterior view and natural daylight, it can be restorative and can counteract at least some of the stress and brain drain.

Light at the end of the tunnel

One of the ways employers can reduce employee stress at this time of the year is by turning the lights on, says Dr Sarah O’Neill, a psychologist with Dublin-based corporate health company Spectrum Wellness.

“The onset of winter, dark evenings and worsening weather can really affect our sense of overall wellbeing,” she says. “In the workplace, seasonal mood changes can result in greater levels of absenteeism and reduced productivity. Staff morale can dip, directly impacting the wider working environment.

“For employers, changes may be subtle and they might feel it’s not their place to get involved, but it’s often in the best interest of both employer and employee that emotional wellbeing issues are addressed proactively to reduce negative outcomes.

“Mood changes are not unusual and people shouldn’t be overly concerned if they notice a dip in energy levels or a change in appetite. However, when such changes negatively impact our physical or mental wellbeing, they cannot be ignored, particularly at work, where we spend so much of our day,” O’Neill says.

1. Ensure the blinds are open and the lights are on before staff arrive so they enter a light-filled space.

2. Rearrange office furniture to get people closer to windows.

3. Encourage staff to go outside at lunchtime. A company-wide walk is one way of doing it.

4. Offer flexitime as it can help people make the most of what natural light is available.

5. Run an event on healthy eating and offer healthy food options in the canteen to avoid the weight gain often associated with comfort-eating during the winter.