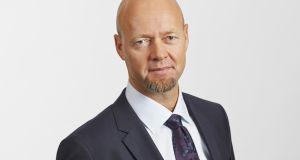 Yngve Slyngstad, chief executive of Norges Bank Investment Management. Does he really email other chief executives’ PAs when he wants to set up a meeting? Yes, quite frequently, he says.

As a general rule I believe everything I read in the Financial Times but the other day I saw something so improbable I thought it had to be a mistake.

A story about Yngve Slyngstad, the head of the world’s biggest sovereign wealth fund, said the 56-year-old Norwegian chief executive had no secretary, arranged his own meetings and made his own travel bookings.

Even by Scandinavian standards, this seemed outlandish. Mr Slyngstad is no scrappy start-up boss. He is paid about $800,000 (a year to run Norway’s $1 trillion oil fund, an investment juggernaut so huge it has shares in more than 9,000 companies and holds nearly 3,500 corporate meetings a year. Does he really email other chief executives’ PAs when he wants to set up a meeting?

I called him and found that, thrillingly, he does. “I do that quite frequently actually,” he said, explaining that when he needs to see one of the CEOs he speaks to a lot he often deals with their assistants. “Some of them are a bit surprised,” he said, especially when he phones back a PA who has just emailed to make an appointment. “They’re a bit, ‘Who are you?’ and I say, ‘Well I’m the one you’ve just arranged the meeting with’.” More often he relies on relevant underlings to handle such details. The investment bank team deals with bankers, the communications team with journalists, and so on. But does he really jump online to book a hotel or flight? He does, though he sometimes calls a travel agent instead. Either route is simpler than going back and forth with an assistant, he says, even when he gets to an airport to find his flight is cancelled.

Inside the office, he thinks having a personal assistant leads to a calendar filled with meetings and makes an executive more remote. He just uses his door: if it is open it means anyone can drop in but if it’s shut it means he is busy. If he needs help on, say, a PowerPoint deck he asks a junior staffer, which has the added bonus of helping him know what is going on around the office.

He does not know of any other chief executive at his level with no assistant and he is not sure it would work in a business with thousands of staff. His has about 600. Listening to him talk though, I wondered why more executives do not follow his example.

The most obvious objection is that a chief executive on a fat salary should be relentlessly focused on the job, not faffing around on Booking. com. Yet Mr Slyngstad, like many top bosses today, is digitally savvy. I do not doubt he finds it faster to book online himself. And why not use expert teams to set up outside meetings or handle incoming traffic?

In a lot of offices, this is already unavoidable: thousands of secretarial jobs were wiped out by the 2008 financial crisis, never to return. In fact, there are signs that more chief executives are trying the PA-free life.

Melba Duncan was an executive assistant to Lehman Brothers boss, Pete Peterson, for years until she founded her own top-flight assistant-recruiting firm in New York more than 30 years ago. She told me she had noticed a jump in calls in the past three years from executives who had taken the assistantless plunge, which she naturally thinks is nuts. “The fact of the matter is an executive’s career gets hindered by stepping into this world of self-support,” she said, citing bosses who had sent themselves to the wrong airport and mucked up their calendars.

Yet I doubt people cling to assistants merely to protect their careers, or even their status.

I have never had a PA and probably never will. But a few weeks ago, I had to go to a conference at a big hotel near Dublin. As I was checking in, a charming woman materialised at my side and announced she had been assigned to be my event “shepherd”. She steered me expertly around the sprawling venue. She found meeting rooms I would never have spotted myself. When I started muttering about a flat battery, she scooted off and returned with three new ones, plus a cup of steaming coffee.

This, I thought guiltily, was the life. I admire Mr Slyngstad for spurning it. No one really needs to be waited on like this and I am sure it is generally inefficient. Yet what a dreadful wrench it must be to give it up.