Pilita Clark: Why I refuse to follow the law while cycling

For cyclists, ignoring the rules of the road can be a matter of survival 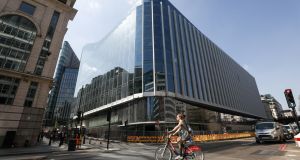 When the sun finally began to shine in the UK this month, I could not wait to drag out my bike to cycle to work.

As soon as I got on the road though, I was struck by a familiar thought: London cyclists are abominable. They sneak through red lights. They scoot along the pavement. They go up one-way streets the wrong way and zip over pedestrian crossings before pedestrians have had time to cross.

I say this with confidence, because I am one of them. I have done most of these things myself and a couple of others as well, as you would know if you had been at Smithfield meat market the other morning.

“Can’t you read?” bawled a woman as I pedalled along the road through the market behind a line of cyclists doing the same thing. I stared at a bit of ground she was pointing at and eventually made out two faded white words: “No Cycling.”

I got off my bike and sheepishly walked. But I have no intention of going totally legit when it comes to London’s road rules – not until they stop being so hopelessly stacked against cyclists. I feel the same way about New York and many other big cities that force a cyclist to choose between life and legality.

Mindful of the times I have nearly hit a cyclist myself when driving, I wear a horrible yellow hi-viz vest and have plastered my bike with safety lights

In my defence, I am utterly law-abiding whenever I am on the best bits of the 65km of Cycle Superhighways that have been built across London since 2010, with their brilliant concrete barriers and special cyclist traffic lights. The same goes for the 100km of “Quietways” that guide bike riders through the city’s backstreets.

But these havens cover just a fraction of London’s roads and it is a marvel they are there at all, considering how loudly drivers squawk about them.

The city is still built for cars, even though they carry just 5 per cent of the 1.3 million people entering the centre each morning rush hour.

So I do what I can to survive.

If I can avoid a menacing line of belching traffic by nipping on to an empty pavement for a few metres, I will do it.

If running through a red light when the coast is obviously clear lets me get safely ahead, I will do that, too. This has been legal for cyclists for years in cities such as Paris, by the way.

And if I am ever near a truck, all bets are off. Officials say lorries have been involved in 53 per cent of London cyclist deaths in recent years, and 18 per cent of pedestrian fatalities, even though they account for just 4 per cent of miles driven.

I should add here that, like most of the cycling city workers I see each day, I am pathetically cautious.

Mindful of the times I have nearly hit a cyclist myself when driving, I wear a horrible yellow hi-viz vest and have plastered my bike with safety lights. I approach lethal intersections like a baby gazelle near a lion’s den, eager not to be one of the more than 400 cyclists killed or seriously hurt annually in the city most years since 2013.

In the 10 years between 2007 and 2016, 98.9% of pedestrian deaths in Britain that occurred in collisions on a footway or verge involved some sort of motor vehicle, not a bicycle

It would never occur to me to ride a “fixie”, with no front brakes and fixed gears, like the one a teenager was on when he knocked over and killed a woman in east London in 2016.

There was an understandable furore over that tragic case, and the British government is looking at stiffer offences for reckless cyclists. That is fair enough. But I wish drivers who park in bike lanes copped more fines too, especially the ones who fling open their doors and whack passing cyclists. Because the truth is cyclists are far more likely to be road-death victims than perpetrators.

In the 10 years between 2007 and 2016, 98.9 per cent of pedestrian deaths in Britain that occurred in collisions on a footway or verge involved some sort of motor vehicle, not a bicycle. Not one pedestrian was killed by a cyclist jumping a red light.

You would hardly know this listening to the non-cycling transport secretary Chris Grayling – who once car-doored a cyclist himself. He thinks some cycle lanes are “a problem” for road users and has complained about lawbreaking cyclists.

Things will doubtless improve as a new generation of more bike-friendly leaders emerges. I live in hope for a city that is caked in Cycle Superhighways, where lorries are banned in rush hour and running red lights safely is legal.

Until then, whenever there is a choice between obeying the rules and staying alive, I intend to stay on the wrong, but saner, side of the law.

1 Coronavirus: We must save lives but we also need to live
2 Avoca warns of redundancies due to coronavirus
3 Over 400 complaints from migrant workers at meat plants lodged with WRC
4 Grounded Aer Lingus pilots develop fix for turnaround glitches
5 Taxi app Free Now blames ‘technical issues’ for driver payment delays
6 Virgin Media vows to withhold sports channels until Eir ‘pays its bill’
7 Companies without tax clearance shut out of Covid wage subsidy
8 Ufurnish: ‘It’s like Skyscanner, but for furniture’
9 Moving in and out of lockdown is a recipe for economic disaster
10 Hozier and Taylor Swift lift Universal Music Ireland’s sales to €20m in 2019
Real news has value SUBSCRIBE