How to turn a backpacker visa into a $20m company 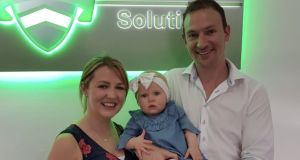 Andrew Harte graduated as a civil engineer from Galway Mayo Institute of Technology in May 2009 and, despite the economic downturn, found work in Ireland. But in 2011, the Roosky, Co Roscommon, man realised “things were quietening down”.

“I said to my wife I wanted to go and see a new country,” he recalls. So, with Denise, he moved to Australia on a working holiday visa, just like tens of thousands of other young Irish people at the time.

“I started working as a labourer and then got a job as an engineer. I saw there was a shortage of skilled labour and set up a company called Eire Workforce Solutions.

“My funds were extremely low at the start and there was no chance of getting a loan, so I decided I would start small and continue to work full time. I did this until the end of 2012. I did all running of the business in our apartment at night and weekends with the help of Denise. It was a huge learning experience.”

Having gained permanent residency in Australia (and later, citizenship), Harte’s next expansion was into the plant hire business.

“We imported a couple of machines from Ireland because the economy had dropped at home and it made sense to ship them over and start hiring them out here.”

Harte Excavations added greatly to this fleet over the past six years and now has more than 30 units of heavy plant hired out across Melbourne.

The expansion did not stop there. In 2014, Harte established Eire Traffic Services which does traffic control for his other businesses, and last year he set up Harte Civil Victoria. The group of four companies now turns over 20 million Australian dollars (€12.97 million) a year and employs about 200 people.

In the recent Irish Australian Chamber of Commerce awards for 2018, Harte won both the young entrepreneur and people’s choice awards. His citation said: “It was a real migrant story of achievement and Andrew’s ability now to help the Australian dream become a reality for many other young Irish arrivals was impressive.”

Winning the awards gave him a chance to take stock, Harte says. “Things are always so busy, you just don’t take time to see what you have done. Being in business, you can sometimes see the headaches rather than the overall achievements.”

Harte is obviously devoted to making the most of his opportunities in Australia, and says he is not alone in this. “My team is driven and are always pushing the limits to take the Harte group to the next level. We all work very hard together and our success to date is evidence of this. Upskilling our employees is something I am passionate about and is a key focus at all levels within the company. Our growth story is proof of what a young ambitious team can achieve from small beginnings in a short few years.”

Having helped many Irish people find work in Melbourne, and now also Sydney, Harte’s companies have supported the visa sponsorship of people looking to stay in Australia long term, too. They also sponsor the St Kevin’s Ladies Gaelic football team in Melbourne.

It is not surprising to learn that Harte has always thought big.

“I think my entrepreneurial vision started at a young age. I come from a working-class background where my father worked in a local factory and we also had a farm. My mother worked in Tesco. Like a lot of families of five, money was extremely tight when we were growing up.

“I would come home from school and go straight out on the farm. When I was 15, I got a job with a fencing contractor for the weekends. During the week, I worked for a steel fabrication company, after I had done the farm work, where I would go in and spray the steel units till all hours of the night.”

He challenges the notion that, for him, it has been an easy ride to success in Australia, though.

“There have been challenges along the way, coming to a new country and setting up a new business from scratch. You have to get to know people and get your name out there. But it’s all about attitude as well. If you have the right attitude and something you want to do, you’ll make it happen.”

Harte’s advice to Irish people thinking of moving to Australia is to “come here, work hard and go for it. There are opportunities here if you put your head down and are willing to work hard. When I came here, I knew nobody. You have to knock on doors and make yourself known in order to be successful”.

Being the sole director of all of his companies and with no other shareholders or investors, it is no surprise that Harte says he has “always been comfortable and confident in a leadership role. I am very comfortable about where the company is at and am looking forward to more growth and success in the future.”