Should employee performance reviews be scrapped? 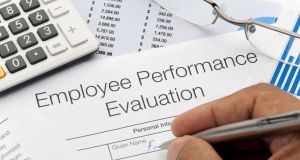 ‘Make a list on a Friday to remind yourself (and your boss) of what you’ve done or achieved,’ management consultant Margaret Heffernan said. Photograph: iStock

Leaders everywhere underwent a crash course last year in managing remotely. In many cases, long established procedures and processes had to change significantly to facilitate working from home: one old chestnut that could still do with a substantial makeover to fit in with the new order is the universally hated performance review.

“Everybody hates writing them, everybody hates getting them and nobody believes them. They have become a completely discredited ritual,” she says.

“What has replaced them in most cases is immediate feedback. ‘Thank you for helping me on that project’ or ‘wow you really messed everyone up by missing your deadline.’ In short, pragmatic actionable feedback.”

The hitch, Heffernan adds, is that most managers don’t know how to give it. “They say useless things like ‘good job’, which doesn’t tell an employee what they should do more or less of. Most people want feedback that will enable them to improve and grow.”

Providing this feedback in a remote working environment is even more of a challenge as performance is rarely only about hitting targets or ticking boxes. The human factor plays a big part in outcomes which is why Frank Scott-Lennon, whose career in HR consultancy spans four decades, believes that reviews and rating scales should be replaced by performance conversations.

“Old style appraisal systems have created a very poor climate and tone for the annual review and performance management on the whole. Now, with the additional pressure of a global pandemic and remote working the challenge becomes huge,” he says.

“The solution is to have regular conversations, either socially distanced or via Zoom; it really doesn’t matter how as long as they are happening every four to six weeks. Consistency is key if people are to feel truly valued.

“A respectful two-way conversation is one of the first rules of effective performance conversations. It sounds simple but it is often neglected by leaders and managers. If you are leading the conversation, get yourself out of the habit of dragging up the past and into the present and future.”

Scott-Lennon says that while the concept of the performance conversation has been around for a while, Covid has created the imperative for its widespread adoption.

“The biggest shift in best practice related to performance appraisal in recent years has been the move to more regular conversations with timely feedback and a future focus,” he says.

“In the context of current and continued remote working, this means managers and team leaders must find ways of staying close to their people and agree priorities for the immediate work period ahead. However, many managers have yet to get into the habit of having this type of regular communication with their home-based teams.”

Research carried out by Scott-Lennon’s company, HR for Better Workplaces, last year showed that 65 per cent of employees surveyed reported a drop in meaningful conversations with their managers since working from home. This was seen as counterproductive as regular constructive conversations were considered intrinsic to motivation and productivity.

Recognising that managers may struggle to grasp the rudiments of performance conversations Scott-Lennon has co-authored a short book on the topic as part of the Management Pocketbooks series. It’s a mix of tips, tools and techniques designed to take the fear and discomfort out of performance analysis and replace it with conversations that become collaborative appraisals.

“Performance conversations need to be very much around what have you achieved for yourself and for the company because a company will develop as the individuals within it learn and grow,” Heffernan says.

“I’ve seen two distinct management responses emerging during the pandemic,” she adds. “The first is positive. It’s where bosses have had to delegate a lot more decision-making and have been impressed by the results as they hadn’t realised their people ‘were that good’.

“The second is negative. It’s an obsession with control. It’s where you have bosses wondering if there is a surveillance offering that would let them see what their people are doing.

“All the fear and trembling about working from home at the beginning of the pandemic was really about control, yet all the evidence shows that if you give people more freedom, they generally tend to do better, which has implications for both management and appraisal styles.”

With so many people now working from home, concerns have begun to surface about how the lack of visibility might affect appraisal and promotion prospects, but Heffernan is reassuring. “In some respects, the pandemic has created a more level playing field,” she says. “It gives employees the opportunity to demonstrate how the work they’re doing has real value for their organisation without having to compete against those who typically do a lot of talking in the workplace but don’t necessarily come up with the goods.”

Heffernan also says employees could do worse than keep a log of what they do day to day because, strange as it may sound, bosses don’t always know the detail.

“Make a list on a Friday to remind yourself (and your boss) of what you’ve done or achieved – the good stuff and the things that didn’t go so well – and use it as the basis for appraisal conversations but also as a way of understanding more about what you want from your job and what your boss wants from you,” she says.