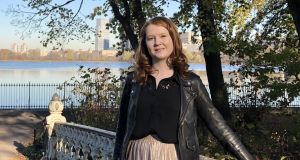 Mastering her native language and culture has given Caoimhe Forde a key to the Big Apple. Originally from Leixlip in Co Kildare, Forde moved to Galway in 2006 to study Irish and psychology at NUI Galway.

“I topped it up with a master’s in modern Irish, with an emphasis on film studies, linguistics and translations.”

The benefits of speaking a niche language came quickly. “When I finished college, I was headhunted by Fordham University on the Upper West Side in New York. So I moved to New York in August 2011, working as an adjunct professor, designing and teaching an undergraduate Irish language course at the Institute of Irish Studies at the college.”

Forde had a green card already, which enabled her step into her new academic career with ease.

“My parents lived in the US and we used to spend our summers in Hastings on the Hudson. I always knew I wanted to come back to work here.”

She was surprised to find that many of her students didn’t have a connection to Ireland. “You would imagine that the people who choose to study Irish in New York have Irish parents or grandparents but it’s not always the case.

“I’ve taught a mixed bag from a chief rabbi to students with Latino backgrounds and no association with Ireland. I’m always amazed by how many people want to learn Irish and Irish history.”

Forde spread her wings with a job at Rosetta Stone between 2012 and 2016. “It offers cloud-based solutions to help learners read, write and speak more than 30 languages, including several endangered languages. I taught Irish as a foreign language, managed an Irish language programme, produced promotional videos and wrote blogs.”

Forde started working with Lehman College in the Bronx in 2016. “It serves the borough and surrounding region as an intellectual, economic and cultural centre. I’m working with Dr Tomás Ó Ihde, who developed the first Irish language and Irish language cinema courses here.”

Teaching Irish and particularly Irish literature, short stories and history, has given Forde the opportunity to view historic events through a different prism. “It’s been really rewarding and I really want to read more Irish history in Irish. I think there are many historic gems in our native tongue waiting to be uncovered.”

Being an expert in language and culture was to open many doors beyond college.

“I have worked as a location scout and guest speaker on the GAA USA documentary series called GAA Eile on RTÉ One. In it, Dara Ó Cinnéide, All-Ireland winning footballer, sports commentator looks back at the history of GAA in the US, while I discuss my research on GAA. It was so interesting.”

The four-part series was nominated for an Irish Film and Television Award and has been broadcast multiple times on TG4.

Forde says that if you live in New York and you’re Irish there’s a high probability that you are part of a voluntary network. “I’m a member of the Leap women’s network and volunteer for the Irish network in New York, which organises speakers series and events across the city.

“I was elected to the board of the Irish Network NYC in January 2018 and re-elected as co-chair in January 2019 and grants officer in 2020.”

“Our motto is Together From Afar, which is apt during this time of corona. The Irish Network NYC consists of Irish nationals, Irish-Americans and Friends of Ireland. It facilitates Irish and Irish-American cultural, social, philanthropic and professional networking events. I’m really glad to be part of it and have made lots of friends and contacts through my voluntary work.”

In February 2020, Forde received a Top 40 Under 40 award from the Irish Echo, the largest Irish-American weekly newspaper in circulation. “I also received recognition from the New York state senate for my work promoting the Irish language, Irish arts and culture in the US.”

Beyond her volunteer engagements and lecturing life, Ford keeps busy as an events manager for Doc’n Roll Film Festival and jury co-ordinator for DOC NYC Film Festival (the largest documentary film festival in the US) for several years. The annual Doc’n Roll festival took place between November 4th and 22nd.

“I’m usually in London and Dublin a couple of times a year to work on our screenings there,” she says. “This year the festival opened with the world premiere of [Stereophonics frontman] Kelly Jones’s documentary, Don’t Let the Devil Take Another Day. We hosted a Q&A with Kelly moderated by Fearne Cotton.

“Obviously all of our events are virtual now, as is my teaching, but I genuinely think people will want human interaction again. I can’t see remote working being a big part of the future, especially not here in New York.”

Forde says Manhattan is a completely different place this year but the changes were occurring pre-coronavirus. “Its much more gentrified now. Places that used to be edgy are expensive and only the wealthy can afford to live there. It’s different, it’s not the New York of my childhood.

“But even with recent restrictions and gentrification, I do love this city so much,” she says. “There’s no other city in the world where you can have a successful career speaking Irish and working as an Irish cultural ambassador.

“I get to work in arts, music, film, social events and the intricacies of a language that is rarely spoken at home. My weeks are packed with things to do and there’s a really great community of Irish people here, who have held together during this tough year.

“New York might be sleeping but it’s not dead and I’m looking forward to how it will evolve post-pandemic.”