He trained as an aerospace engineer in England, now Stephen Mooney is flying high in the US Midwest 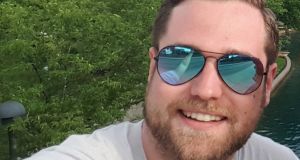 Stephen Mooney is originally from Beaumont in Dublin. He lives in Indianapolis and works in the aerospace industry as a fluid systems engineer.

When did you leave Ireland, and why?
I left Ireland in 2009. I chose to study in London as there were a great deal more aerospace engineering courses to choose from. Like many other Irish people I always had a yearning to see more of the world and decided, at 23, that I would just jump in. Little did I know that I would finally end up in a city that I knew nothing about.

Tell us about your career there as an aeronautical engineer? How did you get started?
I packed up and went to London to study aerospace engineering at Kingston University. I chose England as it was a three-year course and also because I was 23 at the time and felt that I had to get into my desired career as soon as possible. It also helped that the course in England had many industry connections.

Having completed my undergraduate degree, I then obtained a Master’s from Cranfield University in Bedfordshire. I moved to Bristol in the UK to work as an aerospace engineer. Aerospace engineers typically design, manufacture, and test aircraft. Having worked there for almost two years I won the Green Card lottery and decided that I couldn’t turn down the chance of seeing how I would fare working and living in the United States.

What does your day-to-day work involve?
I work for an aerospace propulsion company in Indianapolis now. I work in excess of 40 hours a week, usually between 8am and 5 to 6pm. I have had the privilege to work with many Americans who have had nothing but respect for me - with the odd Irish or immigrant joke thrown in every now and again to foster some personal bonding, all of which is in good fun. Unlike the majority of people here, I cycle to work and do not own a car. Work-life balance in the US is far more weighted on the work side of the equation and being a workaholic myself that suits me just fine.

Are there any challenges you face in your work?
There are some cultural differences that I have had to adapt to. I find that Americans are far more likely to work from very early in the morning to early afternoon. Lunch is also at 11am! Then there is spelling. Even though I do not want to use the letter Z with such a liberal tap of the keyboard, I have had to accept that I live in US society now and this is how the language is written. Personally I don’t think that I have come across any “difficulties” with anyone where I work. There are a lot of different heritages in one place and everyone I have worked with appreciates that people have different cultures.

I never thought that buying a house on my own would ever have been a possibility, let alone a house I love in the location I wanted

What is it like living in Indianapolis?
Indianapolis is distinctly Midwestern. It is a tough culture to explain if you haven’t been here, but needless to say I have been to both coasts and the Midwest feels more like home than anywhere else I have been. The people are friendly, even if you don’t hold the same political views as them. Idianapolis is not the most metropolitan of cities, but it currently does have a net influx of people and having been here for three years I have started to notice a change in the downtown area, where there are more bars, cafes and restaurants. Downtown is not very big, which makes it entirely walkable. House prices are very affordable and having just purchased my first home, I am very grateful for the opportunity to work and live in Indianapolis.

The quality of life I have in Indianapolis far exceeds what I could achieve in either Ireland or England. I feel far more financially stable and have secured a great career. The costs of living are very different and the tipping culture is definitely something to pay attention to. Transportwise I miss Europe. Trains, trams and busses are just not the same. For instance, it is roughly six to seven hours on a train to get from Indianapolis to Chicago, but this is only a three-hour drive. The US has a strong driving culture. A six-hour drive that would seem extremely long for any Irish person is not perceived as particularly long here. There is certainly less of a drinking culture in the US. I have noticed that far more socialising revolves around dinner and less at the bar top.

Do you think working abroad has offered you greater opportunities?
I absolutely feel that having won the Green Card lottery that I have afforded myself the best chance for advancing my career. I never thought that buying a house on my own would ever have been a possibility, let alone a house I love in the location I wanted.

What advice would you give to someone interested in pursuing a career like yours abroad?
I would say that they should absolutely try it. It has been hard to form some personal relationships on the same level as my group of friends in Europe and when you leave you really do notice what you have left behind. I think I was ill-prepared for the solitary nature of life that I experienced for the first few months, but overall I think the short-term pain has paid dividends now.

There is certainly less of a drinking culture in the US. Far more socialising revolves around dinner and less at the bar top

I would advise people to look into how easy it is to get set up financially as it took me a long time to work out the ins and outs of tax and credit.

Where do you see your future?
I do see my future in the US as long-term at the moment. That is not to say that my longing for a more European style of life will not rear its head again at some point, but for right now I am enjoying my American life.

Is there anything you miss about living and working in Ireland?
I do notice the difference when it comes to vacation time. Living so far away from home makes it difficult to visit for a long weekend or to visit other friends in Europe.