Skills shortage seens as holding back growth in financial services 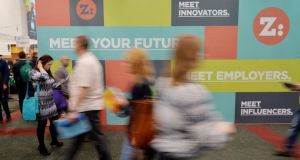 Job prospects are on the up with employers now focusing on the need to retain key staff in improving economic times, says survey. Photograph: Alan Betson / The Irish Times

Companies in financial services know that they lack the specific staff talent they need to succeed but very few are confident of hiring the right people, with the majority admitting a lack of trust in the sector is making things even more difficult.

According to the findings of a new survey, 70 per cent of global chief executives in the financial services sector see the limited availability of key skills as a threat to their prospects for growth. However, only 5 per cent are confident they can secure all the skills they need.

The image of FS has been eroded, the report says, making it harder to compete with other industries in attracting people with prized skills. As many as 62 per cent of CEOs in the sector see lack of trust as a threat to growth, a figure that is even higher than last year.

PricewaterhouseCoopers surveyed 410 CEOs in financial services across 62 countries for the report, A New Take on Talent, which is part of its annual CEO Survey.

Evidence from a separate survey shows that more than eight out of 10 professional staff are open to switching jobs this year.

Lincoln Recruitment Specialists’ salary and employment insights survey gauged the views of more than 1,000 employers and employees over a four-week period late last year. It found that retaining key staff is becoming an increasing concern for employers, with job opportunities and the confidence to switch companies increasing dramatically in the aftermath of the recession.

Almost three-quarters (72 per cent) of senior accounting and finance professionals responding said they envisage switching jobs in the first half of the year.

Among professionals generally, 43 per cent said they were actively looking for new opportunities in an economy which appears to be switching from an employers’ market to an employees’. An alarming 85 per cent envision changing roles within the next year.

“A combination of increased recruitment across the board, a widening talent gap and the return of employee confidence and mobility will present companies with the most challenges in 2015,” predicts the survey.

The survey focuses on the professional services sector, particularly legal, accountancy, insurance, asset management, banking and human resources. It notes that, last year, 58 per cent of respondents reported an increase in salaries across those disciplines, while 48 per cent said they received bonuses.

It said pay rates, bonuses and benefits will likely be crucial in the retention of key staff this year.

Gerard McDonough, tax director, HR services, at PwC, said: “The key challenge financial services CEOs globally and in Ireland are faced with is in how to attract, train and retrain people who, for example, combine digital and financial service skills – few as yet possess such hybrid capabilities.”

According to PwC, the need to create a more flexible and customer-centric organisation demands fewer people with specialist product expertise (depth) and more all-round “athletes” (breadth).

“These people will have the varied technical skills and multi-industry experience to move easily between clients, countries and assignments,” the report says.