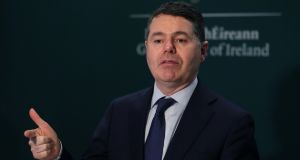 So that full-time workers on the minimum wage are only charged the 2 per cent rate of USC, Minister for Finance Paschal Donohoe raised the ceiling for that rate to €20,484 from €19,874. Photograph: Brian Lawless/PA Wire

Minister for Finance Paschal Donohoe has made a change to a universal social charge (USC) tax band in light of the incoming increase to the national minimum wage.

So that full-time workers on the minimum wage are only charged the 2 per cent rate of USC, Mr Donohoe raised the ceiling for that rate to €20,484 from €19,874.

The logic behind his decision is that a full-time worker with 39 hours of paid work per week will earn €394 every week or €20,483 per year. This follows a decision to increase in the minimum wage by 30c to €10.10 starting from February 1st.

While the amendment will be legislated for later in the year as part of the standard Finance Bill 2020 process, Revenue have agreed that in the interim, the changes will be implemented for the 2020 tax year, according to a statement from the Department of Finance.

While this measure is intended to help minimum wage workers primarily, it will also affect all individuals with income over €19,874. The value of benefit to each individual depends on their income but the maximum benefit is €15.25 a year or 29c per week.

“The Government took the decision at the end of 2019 to further increase the national minimum wage, in a bid to further support working families, focusing on those in lower incomes,” Mr Donohoe said.

“The Government remains committed to ensuring that all work pays well and to reducing excessive tax rates for low and middle income earners,” he added.