Chris Johns: predicting what will happen in the labour market is very difficult

We should encourage more students to be different to robots, not to be like them 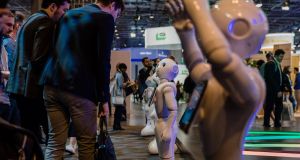 “Progress in robotic engineering and artificial intelligence is moving up the value chain and is, we think, a threat to just about any job”

Last Friday’s US employment report was truly remarkable. Unfortunately the subsequent headlines were as much about a Donald Trump tweet that some took to suggest he was bragging about the numbers before they were released. The president does get prior knowledge about these key economic statistics – arguably the most important data release of all – and many commentators were outraged that potentially market-sensitive information was being talked about on social media.

A US unemployment rate of 3.8 per cent should have attracted all of the attention. We are back to levels of the 1960s, something that nobody forecast. Not only is the US economy at full employment, the very definition of that term is now being hastily revised.

There is some wage growth, but at a 2.7 per cent annual rate we are left scratching our heads: why is inflation so low with a labour market that tight? Whatever “full employment” is, it is much lower than anybody, including the US central bank, thought.

But if you don’t raise interest rates when unemployment is at 3.8 per cent, you probably never will. So the Federal Reserve will, absent a sudden crisis, rise rates later this month, and probably a couple of more times through the rest of 2018.

The rumbling problems in Italy and an apparent sudden slowdown in the European economy – euro zone factory growth is still positive but at a 13-month low – means the ECB won’t be joining suit any time soon. Our interest rates will stay low for as far as the eye can see.

If the jobs situation is harking back half a century to a golden era when full employment was taken for granted, the stance of US budgetary and monetary policies looks more like the Reagan years: then loose fiscal policy and rising interest rates led to a strong dollar. Perhaps history does repeat itself.

The US is embarking on the most extraordinary policy experiment: a massive fiscal boost to the economy just when it doesn’t need it.

Robert Solow, a Nobel prize-winning economics professor, once famously said that computers are everywhere but in the productivity statistics. This remark, made many years ago has contemporary resonance in more ways than one.

The advent of ever-faster, more ubiquitous computing power has never really shown up in the productivity numbers. That’s both a worry and a disappointment. In the end productivity is the only real determinant of growth, wealth and incomes.

The latest twist in this tale is to be found in the much-discussed rise of robots. For some time now it has been apparent that routine factory and office tasks are being automated. Progress in robotic engineering and artificial intelligence is moving up the value chain, and is, we think, a threat to just about any job.

From driverless cars to algorithms that can write newspaper columns, it seems that no job is safe.

Anyone who looks at the literature cannot fail to be struck by a number of things. Most articles about the rise of the robots contain very similar features. Driverless cars and trucks are always mentioned.

The same scholarly papers are always referenced (usually the one that confidently predicted 53 per cent of jobs will be automated). The computer that beat the world champion Go player is also a regular feature: apparently this was a big deal that means we should all be worried. Technologically-induced mass unemployment is on the horizon.

But in an echo of Solow’s old remarks about computers and productivity, the algorithmic threat to employment seems to be everywhere except in the numbers. If jobs are being taken by the machines – and they definitely are – it is either at a very slow rate or new, unexpected, employment opportunities are popping up. The driverless vehicle revolution looks to have been at least postponed: there is an acute shortage of truck drivers in the US.

The number one lesson of all of this is, of course, never to trust a forecast. But it is important to recognise just how difficult it is to predict what is likely to happen to the labour market.

Many of the jobs in existence today were not imaginable by my parents’ generation. That kind of change is likely to continue. So how should policymakers deal with this uncertainty? How can they maximise the chances of the US jobs miracle being both sustained and capable of replication elsewhere?

It isn’t easy, particularly given that point about not being able to predict both the quantity and nature of future jobs. But everyone is convinced that the way forward is to push young people into science, technology, engineering and mathematics (Stem).

In some countries there is an explicit downgrading of arts and other creative studies. That’s understandable but wrong. It’s clear that the economy needs Stem graduates, but not exclusively so.

The very real threat from robots tells us something else. We need creativity, imagination, and that awareness that we know very little about future job roles.

Telling every young person that they need to know how to programme computers risks putting all our eggs in one basket. And also risks telling people to acquire the same technological skills that robots have. We should encourage more students to be different to the robots, not to be like them.

1 Fianna Fáil may have just pressed the pause button on the property market
2 Who are Ireland’s 17 billionaires?
3 Saudi prince’s WhatsApp account ‘directly involved’ in Bezos hack
4 Irish organisations struggle to comply fully with GDPR
5 New blow for Ted Baker as accounting scandal doubles in size
6 Corporate tax change is inevitable, says Donohoe
7 European investor acquires Harcourt Road offices for €55m
8 Are there annual limits on inheritances or gifts to a child?
9 Tipperary land holding of 800 acres seeking €11m
10 My father in a nursing home wants to gift me his house
Real news has value SUBSCRIBE