‘We have one woman already on the board, so we’re done’ 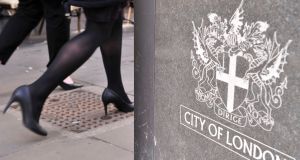 The number of women sitting on Ftse 350 boards has doubled since 2011 with the number of all male boards falling from 152 to 10. Photograph: Daniel Sorabji/AFP/Getty Images

Women aren’t able to understand the “extremely complex” issues Ftse boards deal with, they don’t want the “hassle or pressure” of sitting on a top board and “they don’t fit in”, were some of the outlandish excuses given by chief executives and chairs of Ftse 350 companies to a review aiming to increase the number of women on Ftse boards.

The UK government backed Hampton-Alexander review is challenging all Ftse 250 companies to make sure at least a third of their board members and leadership are women by 2020.

As part of its research, it heard from chief executives and chairs of the UK’s top 350 companies to established why more women weren’t on their company’s boards.

“We have one woman already on the board, so we are done – it is someone else’s turn,” one said.

“Most women don’t want the hassle or pressure of sitting on a board,” was the excuse given by another.

The number of women sitting on Ftse 350 boards has doubled since 2011 with the number of all-male boards falling from 152 to 10.

“Around a third of Ftse 350 companies still have very few women either on their boards or in senior leadership roles. We used to hear these excuses regularly a few years ago, thankfully much less so now,” said Philip Hampton, chairman of the Hampton-Alexander Review.

“Leaders expressing warm words of support but actually doing very little to appoint women into top jobs – or quietly blocking progress – are really not much better,” he added.

A report published by the review team in November found the top board for female representation was from fashion retailer Next, with women comprising 44 per cent of the board. The worst performer was the London Stock Exchange Group at 9.1 per cent.

Under laws introduced in the UK in April last year, more than 8,100 private and voluntary sector companies had to report their gender pay gaps by the beginning of April this year.

According to research by consultancy McKinsey, bridging the gender pay gap could add £150 billion (€171 billion) to the UK economy by 2025.

1 Son putting elderly dad under pressure to sign over land
2 BOI customers to be charged twice with bank fees on New Year’s Eve
3 How to gift your child a house deposit . . . tax free
4 Family in court dispute over hotels in Dublin and Galway
5 City of London makes late scramble to limit Brexit disruption
6 Irish designer of Oxford vaccine: ‘I’ve never worked so hard in my life’
7 Workers have little idea of the cost of retirement income
8 Stripe in talks for new funding at much higher valuation
9 Irish start-up which developed facial recognition for cows raising over $50m
10 Ryanair warns it may reduce more Irish services and relocate operations
Real news has value SUBSCRIBE