World of Work: Larger companies turn to co-working in efficiency and innovation drive 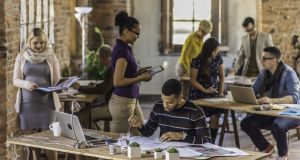 “The practical benefits of co-working spaces are significant. They can enable people to work closer to home, or to their region of responsibility and avoid high property prices and long commutes.” Photograph: iStock

Co-working spaces are usually associated with small businesses and start-ups. However, a growing number of large organisations are now venturing into the world of “corpoworking” which sees much bigger and more established companies locate side-by-side solo workers, small companies and newbie enterprises. SAP, IBM and AT&T have all given it a try.

Co-working spaces have traditionally been attractive for two main reasons: they’re cost effective and collegiate, and often populated by individuals bursting with infectious enthusiasm. This energetic vibe is attractive to corporates that see advantages to having their employees rub shoulders with a “can do” entrepreneurial culture.

Research shows that teams operating in this type of shared environment work better and faster than their colleagues at HQ. They also experience higher levels of job satisfaction and engagement.

For freelancers and start-ups, the supportive atmosphere allows them to learn from each other and form strong networks. It can also be a challenging environment – in a good way – as people often have a disruptive rather than a status quo mindset. As one start-up founder puts it: “I went into the kitchen to make a cup of tea, got chatting to one of the other tenants, and came out 20 minutes later with an entirely different perspective on my business that led to a major pivot.”

The practice is a lot more developed in the United States where there are thousands of corporate co-working facilities, including non-traditional set-ups where teams from different companies (sometimes competitors) work together for a period of time to address a particular issue. The big advantage, users say, is speed. Projects take weeks rather than months to complete.

Writing in the Harvard Business Review last September, researcher Gabor Nagy and Greg Lindsay, who is involved with a co-working hub, say: “The purpose of these spaces can vary widely, but they typically fall into one or more of three groups: transformation, innovation and future-proofing.

In the case of transformation, the space is designed to be a Trojan horse, sneaking new ways of working into an otherwise staid organisation.”

Nagy is an expert on applied research on corporate culture with Haworth (a US company designing high-performing work environments) while Lindsay is the urbanist in residence at the Brooklyn-based start-up accelerator founded by Mini, not to sell cars but to interact with and learn from local designers.

Commenting on the types of individuals selected to participate in these corpoworking teams, the authors say: “Users are typically quite diverse in rank, role and affiliation, and are present for only a few months before rotating out or back into the company. This is a critical feature of campsites in particular – a revolving door means a constant stream of fresh insights and expertise.”

Co-working started in San Francisco in the Noughties with people going to each other’s apartments and morphed into the more formal structure we have today. It’s become a trendy term and those who espouse it in its purest form don’t like the fact that it’s been “hijacked” by those offering serviced offices and what amounts to little more than flexible office space.

“Flexi work space is a commodity”

“I would say co-working is a community whereas flexi work space is a commodity,” says Mike Hannigan, the founder of Coworkinn, which is based in Sandyford in Dublin.

Coworkinn has 60 members who come and go at diffferent times. They are a combination of the self-employed, people working for overseas companies but based here, and start-ups. Coworkinn was set up in 2010 and Hannigan reckons he was one of the first to embrace the concept.

“I worked from home and didn’t like it particularly,” he says. “I became aware of the co-working business model in the US and saw no reason why I couldn’t start something similar here. At its simplest, behaving as a community is at the heart of true co-working.”

Patrick and Suzanne Murdock are the driving force behind The Hub Newry, a group of co-working hubs spread across three locations in the city on the main route from Belfast and Dublin. The Hub is home to around 20 businesses ranging in size from solo workers up to about 40 people, but Patrick Murdock says the sweet spot is companies employing around five people.

“The practical benefits of co-working spaces are significant. They can enable people to work closer to home, or to their region of responsibility and avoid high property prices and long commutes,” he says.

“Indeed, we’re now seeing large organisations with several employees living in a particular area facilitating them to work in a hub away from the main office. At a recent European conference on co-working, a speaker from EY said the firm is planning to have 25 per cent of its employees based in co-working spaces within 10 years.

“We are not talking about co-working that just swaps one city centre office for another. That’s been around for some time. We’re talking about the relatively new trend of corporate co-working in secondary locations in quality premises.”

Murdock says the second big benefit of having these clusters is the positive impact on the local economy. “We believe corporate co-working could help rejuvenate the often-forgotten towns and villages in Ireland especially in border locations which could be impacted heavily by Brexit,” he says.