Almost half of cancer patients say diagnosis hurt their career 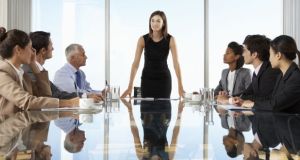 Respondents reported high levels of support from their organisation and manager on returning to work. Photograph: iStock

Almost half of people returning to work after a cancer diagnosis reported that their diagnosis had a negative impact on their career, a new study shows.

Women, younger workers, the self-employed and those working in the public sector were more likely to report a negative impact, according to the survey conducted by the Economic and Social Research Institute (ESRI) and funded by the Irish Cancer Society.

Nearly half (46 per cent) of those that returned to employment identified health issues which affected their ability to return to work.

In general, respondents reported high levels of support from their organisation and manager on returning to work.

However, a third of cancer patients and survivors surveyed reported negative experiences such as reduction in salary or bonus (11 per cent) on their return, or being overlooked for promotion (7 per cent).

The report, which includes a survey based on responses from 377 people affected by cancer in the past decade, finds that while seven in 10 people felt supported by both their employers and manager in returning to their job, nearly half felt that their cancer diagnosis negatively impacted career prospects.

Anne Marie Davy (55) from Galway returned to work in 2018 following major cancer surgery. She said she could relate to many of the study’s findings through her own experiences.

“I wanted to get on with things and get back to normal, which was important to me, but there is a stigma,” she said. “It frustrates me when people make presumptions about what I can and can’t do, and I find that someone in my position ends up often having to fight their own battles.”

Almost four in 10 people referenced financial need as their main reason for returning to work.

Irish Cancer Society director of advocacy Rachel Morrogh said this was an area that must now be addressed.

“Returning to work after a cancer diagnosis is often very important in a patient’s recovery, as it restores a sense of purpose for many,” she said. “It is concerning, however, that so many people felt they had to return to work sooner than they might have wished because of financial challenges. We know from previous research the crippling financial impact a diagnosis can have on people and their families.”

Dr Sheelah Connolly, lead ESRI researcher on the study, said: “The research suggests that many people diagnosed with cancer have a relatively positive experience when returning to employment.

“However, returning to employment can be challenging for several reasons, including ongoing physical and mental health issues. Employers can facilitate the return through open communication with the employee and supporting a flexible return based on the individual’s needs.”