Process-outsourcing company looking at establishing fourth US office by 2020 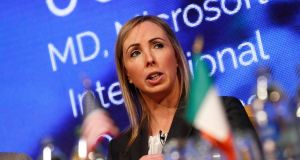 In an address to the American Chamber of Commerce Ireland’s US-Ireland business conference, chief executive Dan Kiely said Voxpro has the ambition to go public before long.

“I started my business with my wife in Cork with six people and we’re going to scale to 5,000 people this year,” Mr Kiely told the event.

Mr Kiely, along with his wife Linda Kiely, sold the Cork-based business in 2017 to Canadian group Telus International, with industry insiders at the time suggesting the deal was worth close to €150 million.

Aside from Cork, the company has offices in Dublin, San Francisco and Folsom, both in California, Athens in the US state of Georgia, Bucharest in Romania and Manila in the Philippines.

Mr Kiely said on Thursday the company was looking at establishing a fourth US office by 2020. He noted that while the business was recruiting staff to work in Ireland from continental Europe, he said the capital’s “shortage of accommodation is a real problem for Ireland Inc”.

“There’s an onus on business leaders to get together and talk to government about how we can solve this problem. It’s coming up with the solution that’s going to be critical to Ireland’s future,” he added.

Also addressing the event was data-protection commissioner Helen Dixon, who said she expected to need additional funding and staff for 2020 given her office’s role in regulating technology companies located in the European Union.

Ms Dixon said when she took over as commissioner the office had about 26 staff. “We now have 133 today, we’re recruiting another 30 this year and we anticipate we’ll be seeking additional budget for next year.”

The commission’s responsibilities have multiplied in light of the General Data Protection Regulation which effectively means that multinationals deal with the regulator in the European member state in which they have their main office. The Irish regulator is thus the main regulator across Europe for companies including Facebook, Microsoft and Google.

In the year to the end of May 2018, the Data Protection Commission found a “massive increase” in the number of complaints lodged, Ms Dixon said. She found that in the roughly 4,000 data breaches reported, human error played a significant part. The regulator has opened statutory enquiries in 48 cases.

Asked about the impact of Brexit on the movement of data. Ms Dixon said that if there’s a withdrawal agreement, there’ll be “data-free flows” until 2020. If there’s a no-deal Brexit, however, the UK becomes a third country for data purposes. That means that any Irish company transferring data to the North or Britain would have to have additional safeguards.

Ms Dixon gave the example of the GAA or An Garda Síochána and companies where payroll functions are outsourced to other entities located outside the Republic.

“There will be resourcing cost implications for sure,” Ms Dixon said.

Earlier, the event heard that the Republic’s financial sector is ill-suited and struggling to financing innovation in intangible assets. Andrew McDowell, vice-president of the European Investment Bank, said investment in intangible assets required more expertise in risk assumptions, adding that it was “difficult to mortgage an algorithm”.