Varadkar resigns amid warning impasse will hit the economy

Business Week: also in the news were jobs, corporation tax, Brexit and the coronavirus 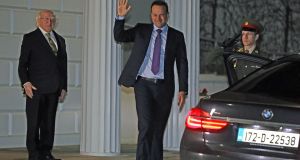 It was after dark by the time Taoiseach Leo Varadkar arrived at Áras an Uachtaráin on Thursday to tender his resignation to President Michael D Higgins having earlier lost the confidence of Dáil Éireann as it met for the first time since the general election.

None of Varadkar, Sinn Féin’s Mary Lou McDonald, Fianna Fáil’s Micheál Martin or the Green Party’s Eamon Ryan secured anything close to the number of votes required to be elected Taoiseach and win the mandate to form a government.

Bitter exchanges between the parties in the House during the earlier debate suggest the political impasse at which we find ourselves now is not likely to dissipate any time soon, which means more uncertain times lie ahead for the economy.

A report from Bank of Ireland this week suggested economic activity may be dampened in the near term as households and businesses rein in spending amid that uncertainty.

For the moment Bank of Ireland has pencilled in 3 per cent consumer spending growth this year, easing to 2.8 per cent in 2021 as employment levels and wages continue to rise.

It estimates that investment will increase in Ireland for both this year and next despite the inconclusive outcome of the general election and uncertainty surrounding future domestic policy.

Exports are predicted to expand 7 per cent in 2020, moderating to 5 per cent next year. The bank also raised its GDP growth forecast for this year by 1 percentage point to 4.8 per cent.

At the same time, new figures from the Central Statistics Office showed employment rose 3.5 per cent – or 80,000 – to 2.36 million during the last three months of 2019, which senior statistician Dr Edel Flannery confirmed was the highest on record.

Information and communication, which includes the multinational-dominated hi-tech industry, showed the highest growth as jobless numbers fell 18,300 – or 14 per cent – to 110,600 people, bringing them down to pre-crash levels.

EY in a separate report said the economy would grow by 3.4 per cent this year before moderating in the years to come. It suggested that whatever government emerges, the domestic economy will be supported.

In line with this growth, EY said it expected job numbers across the island of Ireland to increase by more than 192,000 over the coming five years, something it cautioned will put pressures on other areas of the economy such as housing.

Of course, the economy still faces the twin threats of international reform to corporate tax practices and Brexit.

On the former, a report from ratings agency Moody’s said global taxation shifts were unlikely to materially weaken the existing, settled stock of foreign direct investors in Ireland, but new flows of FDI “could materially decline if any changes are unfavourable”.

On Brexit, several commentators pointed out that the UK government’s new points-based immigration scheme could strangle the North’s economy as it relies heavily on so-called “low-skilled workers” in sectors such as agri-food and hospitality.

Anyone wondering why the Government got such a kicking from the electorate given the healthy growth rates and low unemployment the State currently enjoys needs look no further than a report by EU agency Eurofound this week.

It showed that the number of Irish people aged 25-29 living with their parents grew at one of the highest rates in Europe between 2007 and 2017. This bracket of people grew 11.2 per cent to 47.2 per cent, compared with a 2 per cent increase across the EU.

That report came after builders here warned that State efforts to bolster social housing, along with activity by investment funds, is threatening to squeeze out first-time buyers.

Only about 8,000 of the 21,000 new homes built last year were offered for sale on the open market, according to the Construction Industry Federation, which represents most builders.

It said the State acquired at least 4,400 new homes for social housing, while investment funds bought 95 per cent of the 3,644 apartments completed last year. As a consequence, many people seeking to buy their first home were “locked out”.

Meanwhile, a report from commercial property agent Cushman and Wakefield showed turnover in the build-to-rent sector more than doubled last year to €2.54 billion as institutional investors piled in to the Dublin market in particular.

Ires Reit, the State’s biggest landlord, said it would press ahead with plans to build almost 600 apartments despite fears that a new government could freeze rents. The group also said it collected €62 million in rent from tenants in its 3,666 apartments here last year.

Flights to China hit by coronavirus

The coronavirus epidemic continued to play havoc with the global economy this week, kicking off with a sales warning from Apple that rippled across markets.

The tech giant said it would not meet its revenue guidance for the quarter due to the impact on both production and demand in China. Supply for iPhones would be “temporarily constrained” as manufacturing facilities in China were still not operating at full capacity.

Later in the week European shares notched a fresh record high as a decline in the number of new coronavirus cases and hopes of more stimulus from Beijing helped a recovery from fears of a sustained hit to global supply and demand.

In Ireland, Kerry Group chief executive Edmond Scanlon signalled its sales in China were set to fall by about 30 per cent in the first quarter as its plants in the country were being run with a “skeleton crew” as it deals with the fallout.

Finally, Chinese airline Juneyao Air was to launch a new twice-weekly year-round route between Dublin and China’s largest city Shanghai next month. However, a spokesman for the airline told The Irish Times this would now be deferred.

That decision, as well as the cancellation of a sales mission to China by Tourism Ireland, came as the Department of Foreign Affairs advised against travel to mainland China, excluding Hong Kong and Macau.