Tusk learns hell hath no fury like a Brexiteer scorned

Business Week: Also in the news was the economy; Ryanair; and Denis O’Brien 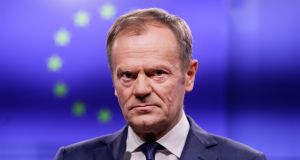 European Council President Donald Tusk should also have known that nobody outdoes the DUP when it comes to fire and brimstone. Photograph: Getty Images

Everybody got a little hot under the collar this week as European Council president Donald Tusk became the latest to let his frustration with the United Kingdom get the better of him, suggesting that “a special place in hell” awaits those who backed Brexit without a plan.

“I’ve been wondering what that place in hell looks like for those who promoted Brexit without even a sketch of a plan for how to carry it out safely,” he said after a meeting with Taoiseach Leo Varadkar.

Most seemed to agree it was an unhelpful intervention at a time when relations with the UK are at an all-time low, and the withdrawal agreement at an impasse in the House of Commons with no sign of a way forward.

Tusk should also have known that nobody outdoes the DUP when it comes to fire and brimstone. The party’s Brexit spokesman Sammy Wilson channelled his inner Dante to describe Tusk as a “devilish, trident-wielding euro maniac”, no less.

Wilson wasn’t the only one to react. British prime minister Theresa May said the remark had caused “widespread dismay” in the UK, while former Ukip leader Nigel Farage said being free of “unelected arrogant bullies” like Tusk sounded “like heaven”.

These days though, Brexit seems a lot more like purgatory than heaven or hell. There were yet more calls from London this week to reopen the withdrawal agreement and – you guessed it – more refusals from Brussels, leaving the process very much in limbo.

May travelled to Belfast on Tuesday where she told business leaders that her commitment to avoiding a hard border was “unshakeable”. She also signalled her intention to push the European Union to agree to a time limit being placed on the backstop.

German chancellor Angela Merkel suggested a “creative” approach to talks could see the backstop questions resolved, but that re-opening the withdrawal agreement was “not on the order of business”.

If the UK didn’t have enough on its plate dealing with Brussels and Dublin, the United States threw in its tuppence worth during an event in the Capitol building to mark the 100th anniversary of the Dáil.

Republican congressman Peter King told an audience: “If the British want to consider any type of trade agreement with the United States it is important that the soft border is maintained.”

Meanwhile, the Bank of England warned that Britain faces its weakest economic growth in 10 years this year, blaming mounting Brexit uncertainty and the global slowdown. But it stuck to its message that interest rates will rise, if a Brexit deal is done.

The latest company to jump ship in the UK was UBS which received approval from a London court to move up to €32 billion in assets from Britain to Germany.

The uncertainty surrounding Brexit was the main reason the European Commission cut its growth forecasts for Ireland this week.

In its latest set of winter forecasts, Brussels forecast the Irish economy would grow by 4.1 per cent this year in gross domestic product (GDP) terms, down from 4.5 per cent previously. That was lower than the Government’s forecast of 4.2 per cent.

“The economic outlook remains clouded by uncertainty,” the commission said in its segment on Ireland. “This relates primarily to the terms of the UK’s withdrawal from the EU.”

There was a warning also from the Central Bank, which said that if the State’s transition to a low-carbon economy is too slow, it will pose macroeconomic and financial stability risks as sharper adjustments will be necessary.

Governor Philip Lane said the financial system had a central role in managing climate risks and financing decarbonisation, but that regulatory policies and supervisory practices must also play their part.

That being said, the latest economic indicators painted a pretty rosy picture for the State. Household debt fell in the third quarter of 2018, reaching its lowest level in 13 years, the latest figures from the Central Bank showed.

Meanwhile, the Republic’s jobless rate remained steady at 5.3 per cent for the second consecutive month in January. That was the lowest recorded since February 2008 and is almost three points below the euro zone average.

Elsewhere, VAT receipts jumped to a record €2.7 billion in January as strong pre-Christmas sales boosted the Government’s tax take for the month. The latest exchequer returns show the sales tax accounted for more than half the €5.4 billion in tax collected.

Week to forget for Irish tycoons

Three of Ireland’s richest men – Denis O’Brien, Dermot Desmond, and Michael O’Leary – will be glad to see the back of this week after each suffered setbacks in their business dealings.

Digicel, the Caribbean telecoms company owned by O’Brien, became embroiled in a $1.5 billion US lawsuit over allegations it is a “co-conspirator” in a “ruse” to divert cash that is meant to fund education in Haiti, but is instead allegedly spent corruptly.

Digicel said it “categorically denies . . . any wrongdoing of any kind” and insisted it follows the law. “Digicel has always conducted its business in Haiti consistent with all applicable laws and regulations,” it said.

Elsewhere, the Central Bank opened an investigation into Datalex, in which Desmond holds a 26.4 per cent stake, after it issued a massive profit warning last month and revealed that it had uncovered a possible accounting issue.

The regulator is understood to be looking at Datalex’s trading statement less than eight weeks earlier in which the company said it was performing in line with expectations and was “confident” about posting double-digit percentage earnings growth.

Finally, O’Leary said he was “disappointed” as Ryanair recorded a loss of €20 million in the three months ended December 31st due to a fall in air fares and a rise in fuel prices.