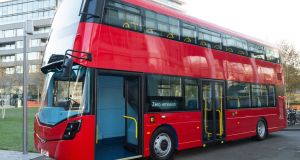 Wrightbus, the Ballymena company which famously produced the new UK prime minister’s Boris Bus when he was mayor of London, has confirmed it is looking for a new investor.

Unions said earlier media reports that the privately owned company, which is one of the North’s largest manufacturers and major employers, was seeking new investors had sparked concerns among its 1,400 strong workforce and the wider Ballymena community.

Wrightbus, which is also one of Northern Ireland’s leading exporters – it sells buses designed and manufactured in Northern Ireland to customers from Las Vegas, to Hong Kong and from Dublin to Chile – has said it is actively working with Deloitte to “bring on board an investor”.

“This is to ensure that the skills and talents of our Ballymena workforce continue to deliver cutting-edge transport vehicles to our customers near and far,” said the company.

The family controlled firm also said that it continues to win new business and has a “strong 2019 order book”.

But trade union Unite said workers at its factory deserved “full transparency” about exactly why the company is looking for new investment at this time.

Last year Wrightbus had warned that it was experiencing difficult conditions in the UK market because potential customers were either postponing or delaying ordering new buses because of “continuing uncertainty” in the UK.

It took a decision last June to axed 95 jobs in a bid to “align workforce requirements” with what it described as its near term order book.

George Brash from the Unite trade union said it is now seeking an urgent meeting with management at the Ballymena bus builder to discuss concerns of its members about the company’s position regarding potential new investors.

Wrightbus outlined in its statement that in a bid to expand its global customer base it is facing “increased complexity to tailor our products to the climate, territory and operating characteristics of our diverse customer base”.

It says one of the reasons it is working with Deloitte to potentially secure new investment is to “strengthen the company’s ability to accelerate its development of new technologies”.

Earlier this year Wrightbus won a multimillion pound contract from Transport for London (TfL) to build 20 pioneering hydrogen double-decker buses which will produce no exhaust pollution.

TfL plans to invest £12 million in the zero emission buses and their associated fuelling infrastructure.

Wrightbus has a long-standing business relationship with TfL. It previously supplied the iconic red Routemaster double-decker bus, known as the Boris bus, to TfL before Mayor of London Sadiq Khan discontinued the contract.

Aberdeen City Council, the European Union and the Scottish Government are jointly financing the deal, estimated to be valued at £7.5 million, for Wrightbus to deliver the 15 buses to transport company First Aberdeen.