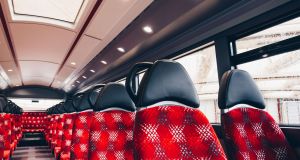 The formerly family-owned Wrightbus was placed in administration last year with the immediate loss of 1,200 jobs.

Ballymena-based Wrightbus will on Wednesday deliver the world’s first double-decker hydrogen buses in Aberdeen, Scotland, a city best known as a base for some of the world’s top oil companies.

The 15 buses made by Wrightbus, which was bought by Jo Bamford, the son of JC Bamford Excavators chair Anthony Bamford, will give Aberdeen one of the world’s biggest fleets of hydrogen buses.

The formerly family-owned Wrightbus was placed in administration last year with the immediate loss of 1,200 jobs, having been one of the North’s most successful manufacturers. It was rescued by Mr Bamford.

Wrightbus also makes electric buses but because of the complication around charging and range-anxiety, Mr Bamford is backing hydrogen which refuels like a petrol pump.

“When it comes to zero emissions the most difficult thing to change is human behaviour,” he said. “We’re creatures of habit, so if you can do something that mimics how we use transport today I think you get mass adoption.”

Hydrogen is already making progress in public transport. Last week the first hydrogen-powered trains were trialled in Britain. They could be carrying passengers by 2022. Buses are ready today, and the cost of running them will come down, according to Mr Bamford, who has been in the business for 15 years.

“We can fill it up at the same cost and it has the same running costs pretty much as a diesel bus but the capital cost is twice as expensive,” Mr Bamford said in an interview. “With a bit of volume we can get the cost down to the same.”

He has asked the UK government for £500 million (€548 million) to support him to build 3,000 hydrogen buses by 2024. Wrightbus is about to complete an order of 20 double-decker hydrogen buses and will take delivery in London at the start of next year.

Another of Mr Bamford’s companies, Ryse Hydrogen, is focused on creating a network for the fuel. The company produces hydrogen using electricity from wind farms, installs and operates storage, transport networks, and dispensing equipment. London will be his first supply customer starting in 2021.

Mr Bamford is looking to set up a $500 million (€425 million) fund that’ll invest in creating an entire supply chain for the gas. He’ll be putting some of his family money into it but he’s looking for someone who has run a private equity energy fund to come and work with him raising the capital.

“Once people start figuring out how to finance this kit this stuff becomes really interesting for the financial world to get going with,” he said. “Everyone knows it’s gonna be a big market. The question is how do you get into it.”

Aberdeen’s green-coloured buses will be road tested for a few weeks before going into service at the end of the month.