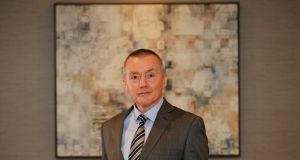 Willie Walsh, outgoing chief executive of IAG. He was dubbed a miracle worker for pulling Aer Lingus back from the brink after he took charge weeks after the September 11th, 2011, attacks. Photograph: Nick Bradshaw

Four years’ ago, as Willie Walsh stared at his 55th birthday, the age at which he once planned to retire, the former pilot gave himself a bit more time before pursuing his dream of unmooring his boat on the Thames and taking it up the Shannon or around the Irish coastline.

“I see myself probably doing a few more years,” said the chief executive of International Airlines Group (IAG) in an interview at the time.

Investors have reaped the benefits, with shares in IAG having soared 28 per cent since then. It brings total gains to 120 per cent since Walsh pushed through the creation of the aviation beast through the £5 billion (€5.89 billion) merger in 2011 of British Airways, where he was CEO, with then-struggling Spanish airline Iberia.

It compares to a 44 per cent advance by the wider European stock market, measured by MSCI Europe Index.

Total returns at IAG, including dividends, over the period topped 180 per cent over the period. Cash returned to shareholders through dividends and share buybacks have exceeded €4 billion.

Not bad for a company in a sector more synonymous with burning through shareholders cash. It’s an industry that once famously prompted legendary US investor Warren Buffett to conclude that a lot of investors’ money would have been saved if capitalists had shot down the Wright brothers’ first plane.

Buffett’s frustration doesn’t appear to have put him off, however, with his Berkshire Hathaway investment company currently holding four airline stocks.

Dubbed a miracle worker for pulling Aer Lingus back from the brink after he took charge as CEO weeks after the September 11th, 2011, attacks with a plan to cut 2,000 jobs and move to a low-cost model, Walsh was hired as British Airways’ chief in 2005.

Following the creation of IAG, he went on to mop up Barcelona-based Vueling, British Midlands, and in 2015, Aer Lingus, following careful courtship of the Government, which owned 25 per cent of the carrier, opposition parties, unions, county councillors and Ryanair, which controlled almost 30 per cent.

The deal-making has continued, with IAG agreeing last November to buy Spain’s Air Europa for €1 billion to boost its routes to Latin America and the Caribbean.

Empire building is one thing. Delivering value for investors, something else. Here Walsh has delivered in spades, albeit often at the cost of run-ins with unions and customers. Last September’s pilot strikes at British Airways was particularly ugly, resulting in the cancellation of more than 2,300 flights and cost the carrier £121 million.

Walsh’s keen eye on the bottom line saw IAG’s return on invested capital (ROIC), a key measure of profitability, come in at an outstanding 16.6 per cent in 2018 – led, by some distance, by Aer Lingus’s 26.8 per cent return, according to Deutsche Bank analysts. Returns at Ryanair and Lufthansa were below 10 per cent, by comparison.

While Walsh moved in November, on a day of investor presentations, to scale back IAG’s capacity expansion and earnings growth plans for the three years to 2022 to protect ticket prices in the face of weakening demand in a slowing economy, he stuck doggedly to maintaining a 15 per cent ROIC target for the period.

Markets have taken comfort from the fact that Iberia boss Luis Gallego is taking charge of the cockpit from Walsh. The stock advancing in the past two days on hopes that the Spaniard will continue will continue Walsh’s financial discipline.

But Walsh is leaving to his successor the daunting tasks of navigating Brexit and the era of flight shame, the industry’s biggest challenge, at a time when aviation accounts for more than 2 per cent of global emissions.

Three months’ ago, IAG became the world’s first airline group to commit to achieving net zero carbon emissions by 2050, no doubt mindful of how consumers may change their behaviour amid mounting concern about climate change.

To achieve this, measures include offsetting carbon emissions from all British Airways UK domestic flights from this year by investing in “verified” initiatives including solar energy projects, forestation programmes and tree planting in South America, Africa and Asia.

IAG also plans $400 million (€360 million) of investments in sustainable aviation fuel in the next 20 years, including a partnership to build Europe’s first plant to convert household waste into jet fuel, and replacing older craft with more carbon-efficient models.

The group has some way to go. It currently stands as one of the highest emitters – on the basis of carbon dioxide grams per passenger per kilometre – among major players in the sector in Europe.

Meanwhile, calls for the introduction of taxes on air travel are growing. The industry is currently effectively subsidised on a global scale by the 1994 Chicago Convention on Civil Aviation, which leaves aviation kerosene exempt from tax virtually everywhere.