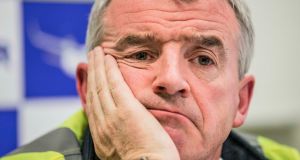 The EU Commission shot down Ryanair’s bid to buy out Aer Lingus, in which it already holds a 29 per cent stake, on competition concerns.

The two airlines are rivals on a number of routes between Ireland and Britain, including between Dublin and London. The UK’s mergers watchdog was one of a number of bodies that inquired into the bid in recent weeks.

In its submission, one of a number of third party presentations made to the UK commission, the Dublin Airport Authority said Aer Lingus and Ryanair had 90 per cent of traffic between the Republic and the UK.

Ryanair had offered to give up certain routes to London from Irish airports to BA and 43 of Aer Lingus’s short-haul routes to British regional carrier Flybe, which was also to get €100 million in capital to help launch a new business in Ireland as part of its takeover proposal.

Ryanair would have taken over the balance of Aer Lingus’s routes, including its long-haul business to the US.