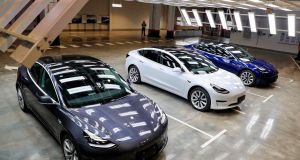 Tesla’s shares rose above $500 for the first time on Monday as Wall Street analysts played catch-up with the electric-vehicle maker’s share price, which has doubled from October.

Oppenheimer and Co analyst Colin Rusch raised his price target on the stock to a high $612 from $385 on Monday, saying that after many initial stumbles, Tesla has “reached critical scale sufficient to support sustainable positive free cash flow.”

Rusch’s move marked the latest in a string of similar boosts by Tesla analysts over the past week as shares of the company continued to rise higher after fourth-quarter vehicle deliveries surpassed expectations. Other positive developments boosting the stock include a Chinese official saying the government won’t significantly scale back electric-vehicle subsidies this year.

Rusch said Tesla’s high risk tolerance, its ability to learn from past errors and bigger ambition compared to peers pose an “existential threat” to other transportation companies that are unable or unwilling to innovate at a faster pace. He maintained his buy-equivalent rating on the stock.

On Friday, Piper Sandler raised its target on Tesla, following a hike by Argus on January 7th.

Wall Street, however, may not be fully convinced yet. Despite the rush of boosts in recent weeks, the spread between analysts’ average price target and Tesla’s stock is still at the widest since the company’s initial public offering in 2010.

Tesla shares have been on a strong upward trend after the company reported a surprise profit for the third quarter, which was followed by some improvement in overall analyst sentiment on the company, with the final push coming from the strong delivery numbers early this month.