In a suit filed in France before he fled Japan, lawyers for Mr Ghosn say he is entitled to the payment despite quitting as company chairman last January 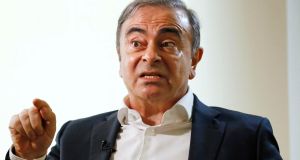 Former Renault boss Carlos Ghosn speaks to Japanese media during an interview in Beirut on January 10th. Ghosn is taking Renault to court in an attempt to claim a €250,000 pension payment, in the first of several legal cases the fugitive former car boss hopes to use to recoup money forfeited since his arrest in 2018. Photograph: Meika Fujio/Kyodo News via AP

Carlos Ghosn is taking Renault to court in an attempt to claim a €250,000 pension payment, in the first of several legal cases the fugitive former car boss hopes to use to recoup money forfeited since his arrest in 2018.

In a suit filed to France’s labour court before he fled Japan, lawyers for Mr Ghosn argued that he is entitled to the payment despite quitting as company chairman last January while in Japanese custody.

Another case expected to be lodged this month by Mr Ghosn’s lawyers at a French commercial court will argue he should also receive a pension worth €770,000 a year, as well as shares worth €15.5 million that would have paid out if he had stayed at the business.

French newspaper Le Figaro first reported the two cases alongside an interview with Mr Ghosn. Renault has declined to comment.

At a press conference in Beirut last week, he vowed to clear his name and defeat the charges from Japanese prosecutors that he misstated his income at Nissan and misused company funds.

The French labour court case against Renault pits Mr Ghosn against the business he led for two decades, and helped build into one of the world’s largest carmakers with its alliance partner Nissan.

That employment tribunal will centre on Mr Ghosn’s status as an employee of Renault, rather than his position as a “corporate officer,” a title he held as CEO and chairman.

Mr Ghosn’s lawyers will argue he should be treated as an employee, allowing him the payment, because he had resigned his post as a corporate officer in January. Renault will argue that Mr Ghosn is not entitled to the payment.

The commercial case, which is yet to be filed, will centre on a resignation letter to Renault’s board signed by Mr Ghosn while he was in custody, which he now claims was not valid.

In resigning, Mr Ghosn forfeited his retirement payments and future share awards. His lawyers will argue Japanese authorities made him sign the letter, and that he was also forced to give up his position because he was not able to attend Renault meetings to carry out the role.

The live tribunal case is expected to be heard at the end of February. Mr Ghosn is not obliged to attend.

Mr Ghosn has said he is willing to stand trial in any country that will offer him a fair hearing but at the moment is confined to Lebanon under a travel ban.

It is unclear whether he knew that he would be out of Japan when the employment case was lodged, though his escape had been planned for several months.

In a sometimes emotional public appearance last week, he described Japan as repaying him “with evil” for decades of service that included rescuing Nissan from the brink of bankruptcy and pushing it to co-operate with alliance partner Renault.

The partnership between the two companies is faltering in the wake of Mr Ghosn’s removal, with senior Nissan executives drawing up contingency plans for an eventual split from Renault, the Finanical Times reported on Monday.

Renault’s shares fell 3 per cent to €40.70 following the report, while Nissan shares fell 1 per cent. - Copyright The Financial Times Limited 2020