Flybe is on the brink of collapse, reports say 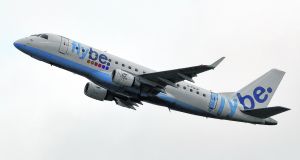 Fears are growing for some flights to Britain from several Irish airports following reports that regional carrier Flybe is on the brink of collapse.

Reports said that the British airline was seeking emergency cash from the UK government to help it stay in business.

Belfast City would be hardest hit should financial problems ground Flybe. The airline operates 14 services from there to destinations such as London, Edinburgh, Cardiff, Manchester, and Glasgow, along with other regional centres.

The airline’s collapse would also hit Knock airport in Co Mayo, from where Flybe flies to Birmingham, East Midlands and Manchester.

Flybe offers flights to Cardiff, Exeter and Southampton from Dublin and it serves Cardiff from Cork.

Irish airline Stobart, part of the Connect Airways group along with Flybe, operates services from Southend airport to the Isle of Man and destinations in France for the troubled UK carrier. Stobart did not comment on reports of Flybe’s financial woes on Monday.

Flybe itself said that it did not comment on “rumour or speculation”. The airline noted that it continued to provide services and that its passengers could travel as planned.

Sky News said Flybe, which connects British regional airports with Irish and European destinations, was on the brink of collapse due to mounting losses and as Connect’s financing requirements had become more onerous.

Should Flybe collapse, it would be the second high-profile failure in Britain’s airline and travel industry in less than six months.

Sky News said the UK’s department of transport was considering whether the government could provide any emergency financing for the company.

The department declined to comment. “We do not comment on speculation or the financial affairs of private companies,” a spokesman said.

Lonely Planet sold to US digital marketing group for undisclosed sum 20:53
Conor McGregor’s management firm returned to profit in 2019 20:00
Hallahan to step down as MD of Microsoft Ireland 19:51
New car sales up 20% in November despite lockdown 19:40
Co-living scheme in D4 gets green light 19:25