Electric car-maker likely to settle on location for European factory by the end of the year, and expects to start selling in India in 2020 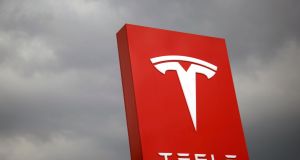 Tesla is increasing output at its US factory, launching production in China, overhauling its US retail and service operations and developing new models. Photograph: Tyrone Siu/Reuters

Tesla has “a decent shot at a record quarter on every level”, chief executive Elon Musk said at the company’s annual shareholder meeting on Tuesday, soothing concerns about weak demand for the electric car- maker’s vehicles.

Tesla’s stock rose 3.6 per cent to $225 (€199) in extended trading, and Mr Musk also said the company was on track to hit its volume production goal by the end of this year.

Mr Musk was treated as a star by investors at the annual meeting, receiving applause as he laid out plans for global expansion and going so far as to tell an inquiring investor that Tesla engineers “actually have a design for a submarine car”. He said making one would be a distraction and have a small market.

Analysts have questioned whether there is global demand for the hundreds of thousands of Model 3 saloons and other vehicles Tesla aims to produce after deliveries fell 31 per cent in the first quarter. Rivals are stepping up efforts, and Tesla continues to invest heavily in expansion.

Mr Musk’s positive comments on Tuesday echoed his forecast last month that the company was on track to hit record deliveries in the second quarter.

Yet ramping production strains finances, and Tesla is increasing output at its US factory, launching production in China, overhauling its US retail and service operations and developing new models.

“It’s hard to be profitable with a high growth rate,” Mr Musk said, expressing confidence that Tesla would be “cash flow positive” despite those challenges.

Tesla lost $702 million in the first quarter, and has said profit would be delayed until the latter half of the year.

Mr Musk’s plans include unveiling an electric pickup truck this summer and getting into truck production toward the end of next year.

He said he hoped to have an investor day on batteries by the end of the year, and emphasised that battery production was the key to vehicle production.

“Having to not pay tariffs and have the really long delivery chain and high transport costs will make the cars a lot more affordable to people in Europe and China,” Mr Musk said.

Tesla was likely to settle on a location for a European factory by the end of the year, and expects to start selling in India by next year.

Mr Musk also teased that Tesla could get into mining of metals crucial for battery production to further lower costs. “We’ll do whatever we have to, to ensure that we can scale at the fastest rate possible.”

Mr Musk has faced criticism about his outspoken nature, including Twitter use that led to a settlement with US regulators, but shareholders rejected corporate governance proposals calling for reducing the terms of directors and eliminating some supermajority voting requirements. – Reuters