Low take-up of electric cars linked to confusion over tax

A ‘comprehensive review of benefit in kind on vehicles’ will take place this year, according to the Minister of Finance 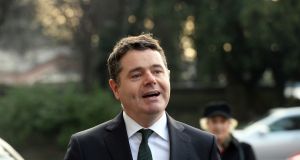 Confusion over the tax implications when charging an electric car at work was one of the reasons cited for the low take-up of plug-in vehicles on the corporate fleet.

Prior to the budget, the Department of Finance considered how best to change the the rules on benefit in kind (BIK) for electric cars to encourage firms to invest in environmentally friendly vehicles.

The Programme for Government had committed the State to being a leader in take-up of electric vehicles but the Republic has instead lagged far behind other EU nations.

A pre-budget departmental paper for Finance Minister Paschal Donohoe explained that benefit-in-kind treatment was creating a “barrier to their adoption by business”.

Three options were given to Minister Donohoe including clarification that free charging at the workplace would be exempt from benefit in kind.

A second option of cutting benefit in kind on electric vehicles from 30 per cent to zero per cent was described as having “merit on environmental grounds”.

The third involved a wider review of measures for making the battery-powered cars more attractive in advance of next year’s budget.

In a note to civil servants, Minister Donohoe wrote: “Can we do all of the three options? Costs appear to be minimal.”

The submission explained that uptake of electric vehicles remained “stubbornly slow” in Ireland with only 2,500 vehicles on the road currently.

This was despite a range of “generous” incentives including VRT relief, and sustainable energy grants.

Looking at measures available in other EU countries, a zero per cent BIK rate appeared effective when compared to the 30 per cent rate in Ireland.

Confusion over whether employees could be taxed under BIK rules for charging their electric cars while at work was also considered as a problem causing low uptake of the vehicles.

The submission said: “Revenue were recently asked for clarification on whether electricity provided by the workplace . . . constituted a BIK. Revenue concluded that it is.”

The cost of introducing a zero percent benefit in kind on vehicles varied enormously, according to the submission. For the cheapest electric cars on the market, it would be as low as €1,400 but could be as high as €26,000.

While the Finance Act has introduced a one-year zero per cent BIK rate for electric cars, the Minister for Finance, Paschal Donohoe, later stated his intention for the zero rate to remain in place for a minimum of three to five years.

Speaking in October he said: “While this relief is provided for an initial period of one year, it is my intention that the zero rate will remain in place for a period of time, a minimum of three to five years, sufficient to incentivise the uptake of electric vehicles.” He confirmed a comprehensive review of benefit in kind on vehicles would take place in 2018. Most firms lease their company cars on at least a three-year basis.

The Department of Finance said: “A comprehensive review by the Department of BIK on motor vehicles will take place in 2018. It is expected that this review, as well as examining incentives for more environmentally friendly vehicles, will examine basing the BIK system on CO2 emissions of all motor vehicles. It is anticipated that this review will inform decisions for Budget 2019.”

Irishwoman in Australia: I want to return home but I’m frightened
8