Ryanair passengers in Ireland may be hit by strike next week 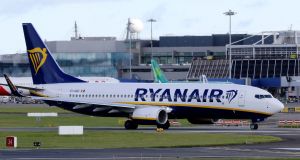 Ryanair passengers face possible disruption next week in what could be the first of a series of pilot strikes in the Republic and other European countries over representation rights.

Up to 117 members of the Irish Airline Pilots’ Association, part of trade union Impact, employed by Ryanair at Cork, Dublin and Shannon airports are set to strike on Wednesday, December 20th.

Impact said that Irish-based directly-employed pilots, most of them captains, would withdraw their labour in an action that the organisation claimed could disrupt flights and cost Ryanair substantial sums of money.

The union served notice on Ryanair on Tuesday after members voted for industrial action. Impact spokesman Niall Shanahan warned that further stoppages “were probable unless there is dialogue with Ryanair”.

Pilots are campaigning for a new collective bargaining system to replace the employee representative councils that negotiate for staff at each of the airline’s 80-plus bases across Europe.

Ryanair refuses to deal with the new organisation that pilots want to represent them, the European Employee Representative Council (EERC), saying that its existing approach has Supreme Court backing.

“The goal here is to achieve the representation that the Ryanair pilots are seeking through the EERC,” Mr Shanahan said.

Have your say: Were you due to fly with Ryanair?

Ryanair said it would deal with “any such disruptions if, or when they arise”, and added that the threatened action involved less than 28 per cent of pilots at Dublin Airport, its biggest base in the Republic.

The company warned that pilots taking part would be in breach of a Dublin base agreement, and would lose benefits such as a five-days-on, four-days-off roster.

Removing benefits from pilots who take part in the stoppage could lead to further action. Impact’s notice warns that members will strike if the airline takes such steps against them as a result of the dispute.

Ryanair argued that the notice issued on Tuesday proved that the action was about recognition for the “Aer Lingus pilots’ union” and not pay and conditions.

It is not clear how much disruption the strike could cause. Most of the pilots involved are captains, required by regulations on all passenger flights. The union acknowledged that Ryanair could fly in captains from other countries if necessary. The airline did not comment on this, but its statement said that “some disruption may occur”.

News of a possible strike at the airline’s Irish operations came as Ryanair pilots in other European countries signalled plans for similar action.

Italian pilots intend to halt work for four hours on Friday, December 15th. Last month they announced and then cancelled a similar stoppage.

On Tuesday, the German Pilots Association (VC) said that “from today on strike action within Ryanair can be expected at any time”.

German industrial relations law does not require the same balloting and notice procedures, so pilots there can strike with little or no warning. VC pledged to take no action on peak Christmas travel days between December 23rd and 26th.

“Ryanair can stop the Germany industrial action right now by declaring the willingness to negotiate proper terms and conditions of work and remunerations; a last chance is still being offered,” said VC president Ilja Schulz.

Ryanair maintains that pilots at bases including Cork and Shannon have voted for pay increases that will leave them 20 per cent better off than those flying for rivals.

The airline said it had not received any notice from German pilots. “If any such action takes place Ryanair will deal with it head on, but we will not deal with or recognise the Lufthansa pilots’ union VC, regardless of what action – if any – takes place.”