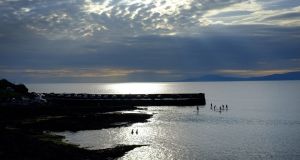 Creevy pier in Co Donegal, part on the Wild Atlantic Way. It is envisaged that younger travellers, tourists who have visited Ireland before, and people visiting Irish friends and relatives will be among the first to come back

State tourism officials are planning for a resumption of the arrival of significant numbers of foreign visitors to Ireland sometime between April and June.

Niall Gibbons, the chief executive of the all-island marketing body Tourism Ireland, told an industry online conference on Wednesday that he hopes international tourism will restart during the second quarter of 2021.

It is envisaged that younger travellers, tourists who have visited Ireland before, and people visiting Irish friends and relatives will be among the first to come back.

Tourism Ireland has a devised an international ad campaign themed around convincing potential visitors to “press the green button” and book a trip to Ireland.

The agency hopes to launch the campaign in major markets such as the UK, Germany, France and the US around St Patrick’s Day, with a view to welcoming visitors in the following months.

Speaking afterwards to The Irish Times, Mr Gibbons suggested a final decision had not yet been taken on whether to activate the campaign as it would depend on the prevalence of coronavirus and anti-virus restrictions in Ireland and its main source markets.

“We will make a call on it in January, so let’s see what happens. If the campaign is activated we will run it around St Patrick’s week. We will take close advice from [other arms of the State] before we make the decision. This is not a call that will be made in isolation inside Tourism Ireland.”

Tourism Ireland has also devised several other marketing campaigns in coming months to reignite the idea of Ireland as a potential destination in the minds of potential visitors.

Over Christmas a “let’s get back to Ireland” video will run online in 12 source markets across Europe and further afield. An advertising campaign targeting the Irish diaspora will also run in Britain, Canada and the US.

The tourism industry, which was performing at record levels until the arrival of the pandemic, has been devastated by the virus and ensuing travel restrictions. Overseas tourists spent almost €6 billion in Ireland in 2019, but this has fallen by close to 80 per cent this year, Mr Gibbons said.

Almost all of 2020’s revenues from foreign tourists were generated in January and February before the pandemic hit.

The decision over when and how to welcome back international tourists is likely to spark debate between the State’s economic and public health officials, with many of the latter known to be wary about bringing back international visitors until vaccine rollouts have significantly dampened infection rates.

The State has signed up to the EU’s traffic-light system for facilitating international travel, which depends upon risk classifications derived from virus rates.

However, some Irish public health officials have angered executives within the aviation and tourism industries by continuing to advise the public against any non-essential travel even though that is not the State’s official position since it has adopted the traffic-light system.