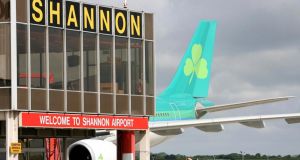 Shannon Group said passenger numbers at the airport increased for the fourth consecutive year with more than 1.75 million passengers passing through in 2016.

Shannon Airport is to undergo a “significant investment programme” after turnover at its parent company rose 2 per cent last year to €67.2 million.

The group’s chief executive, Matthew Thomas, said the company’s improving financial performance was “necessary” to enable it to undertake “critical investments” across its business units.

“The Shannon Group has a unique mix of complementary businesses that, more than any other commercial entity in the region, gives it the potential to positively influence economic development,” he said.

“For example, 16 companies who announced new or expanded operations in 2016 in the midwest cited the global connectivity at Shannon Airport as a key influencer in their decision to invest here.

“To realise our full potential as a catalyst for growth in the region we plan to undertake a significant investment programme across our businesses, particularly at Shannon Airport and Shannon Commercial Properties.”

Last year was positive in terms of new business at the airport, with four airlines – Scandinavian Airlines, Lufthansa, Norwegian Air International and Kuwait Airways – all announcing new operations there.

On Shannon Heritage, which manages the Republic’s largest collection of visitor attractions, Mr Thomas said there was “very significant opportunity” for growth there also.

He said this would come both in terms of increasing visitor numbers at existing heritage sites and also through expanding the group’s portfolio.

Shannon Heritage experienced “significant growth” in 2016, with visitor numbers at its venues in Clare, Limerick, Galway and Dublin growing by 30 per cent overall. More than 904,000 people visited attractions.

Shannon Group said much of its focus was on delivering infrastructure to entice foreign direct investment and indigenous investment to the region, as well as improving its overall customer offering.

It invested more than €13 million across its companies in 2016, bringing to almost €30 million the total invested since the formation of the Shannon Group in September 2014.

By the end of 2016, Shannon Commercial Properties had over 200,000sq ft of new or upgraded facilities and, by the end of 2018, it plans to complete a further 225,000sq ft of state-of-the-art advanced manufacturing, warehousing and office space.

This is designed to support the company’s objective to attract investment and jobs to the area.