Strengthening Ireland’s links to outside world 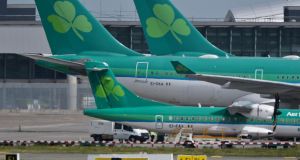 It falls comfortably within its remit, but the Ireland Strategic Investment Fund’s (ISIF) decision to loan €10 million to Shannon Airport to help pay for the renewal of its runway could yet spark speculation about another, much larger, project of the same type.

The money that the State fund will loan to Shannon comes from the €335 million that the Government received for the Republic’s 25 per cent share in Aer Lingus when the former national flag carrier was sold to Willie Walsh’s International Airlines Group in September 2015.

One of the commitments made by the then Fine Gael-Labour coalition to get political backing for the sale was that the money would go into a special fund earmarked for projects that would deliver an economic impact and boost the Republic’s links with the rest of the world.

The ISIF, which was originally given charge of the €8.1 billion left from the national pension reserve after the 2010 bailout, also took control of the Aer Lingus cash. Along with the Shannon runway, it has bought €35 million of bonds issued by the Dublin and Cork airports company, DAA.

Clearly, as an island that will shortly be two steps removed from the EU, any undertaking that strengthens our links to the outside world, particularly those beyond Britain, are going be more important than ever before.

Allied to that, Shannon Airport is pushing ahead with a €44 million investment plan meant to ensure its future growth, something that should help create jobs. So it fits the bill for a share of the Aer Lingus cash.

However, Shannon is not the only airport looking to improve its runway. Dublin has already begun work on its new runway, which will cost an estimated €320 million to build.

Presumably this is another project vital to keeping us connected to the wider world and which will have a – very high – impact on job creation. What is the betting that some of the €278 million remaining from the Aer Lingus sale goes towards that development as well?