Cantillon: Aviation will have to keep its seat belts tightly buckled for some time to come 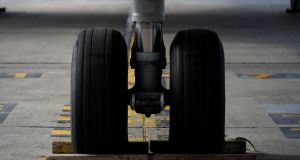 About 75 per cent of the world’s passenger craft are grounded with only limited take-off likely in coming months. Photograph: Reuters/Benoit Tessier

Michael Gill, environmental executive with the International Air Transport Association, told the BBC on Wednesday that the industry body believes aviation will return to something like normal around 2022/23. So, just two months into the Covid-19 crisis, the goalposts have shifted again for flying.

As countries locked down in March, many in the sector warned that it would be next year before aviation returned to 2019 levels. That now seems optimistic. About 75 per cent of the world’s passenger craft are grounded with only limited take-off likely in coming months.

This is not just hitting airlines. Aircraft lessors, which employ about 5,000 in the Republic and contribute an estimated €550 million a year to the economy, must also navigate this turbulence. Irish-based Avolon, one of global leasing’s biggest players, says airlines, which account for 90 per cent of revenues from leasing its aircraft, are seeking deferrals on its rent.

The company has already agreed to defer some customers’ rents for three months, while a statement detailing its first-quarter results indicated that it could do more such deals.

Meanwhile, GE Aviation, which makes aircraft engines, and whose leasing arm, GE Capital Aviation Services, has a substantial presence in Shannon, is letting go more than 10,000 workers through voluntary redundancy and early retirement. Boeing and Airbus have already said they will cut aircraft production by a third.

Air travel involves more than flying. Aircraft are made, fitted, flown, maintained and financed. Millions of workers around the world, whose skills range from engineering and design to accounting and law, now face an uncertain future.

That is particularly true here, home of several carriers, including Europe’s biggest, Ryanair, some of the world’s biggest aircraft lessors, substantial maintenance businesses, not to mention international airports, key to both exports and tourism.

Covid-19 could prove to be only the first wave of turbulence that air travel hits in the new decade. Airline closures look inevitable, as do rows over State aid while passenger numbers seem poised to fall. In Europe at least, the industry faces paying carbon taxes and new fuel duties. Irish and global aviation will have to keep those seat belts tightly buckled for some time to come.