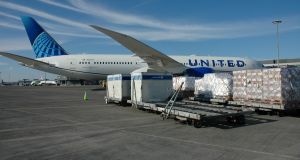 A United Airlines aircraft being loaded with cargo. The US airline has launched a cargo service between Dublin and Washington DC, operating three times a week

The airline confirmed on Monday that the flights between Dublin and the carrier’s hub at Washington Dulles Airport would carry “a range of commodities”.

These will include pharmaceuticals and medical products made in the Republic along with general cargo.

Liz Woolmington, United’s senior cargo manager for Europe, the Middle East, Africa and India, said that the airline’s aim of connecting products to people around the world has “never been more crucial than during the current crisis”.

Covid-19 has virtually grounded passenger flights from the Republic’s airports, but cargo services continue, some carrying medical supplies needed in the fight against the disease.

Headquartered in Chicago, Illinois, United is one of North America’s biggest airlines. The company reported on Monday that it lost $2.1 billion (€1.9 billion) in the first three months of this year as Covid-19 brought air travel to a standstill.