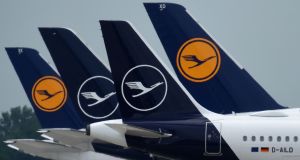 Ryanair chief executive Michael O’Leary accused the German government of using “the pretext of Covid-19” to prop up Lufthansa with a bailout.

Ryanair has accused rival German airline Lufthansa of a price-fixing cartel and has vowed to challenge its €6 billion bailout in the European Court of Justice.

Airline chief Michael O’Leary accused the German government of using “the pretext of Covid-19” to prop up Lufthansa with a bailout that “even the airline’s own CEO admits it does not need”.

“This is a spectacular case of a rich EU member state ignoring the EU treaties to the benefit of its national industry and the detriment of poorer countries,” Mr O’Leary said.

“The commission’s approval of the Lufthansa bailout today is a betrayal of the core principles of EU law, which we have no alternative but to refer to the EU General Court.”

It came after the European Commission approved a €6 billion bailout of the German airline, noting that Lufthansa played a vital role in the German economy and that it and its subsidiaries had been badly affected by a “heavy decline in travel”.

“But it comes with strings attached, including to ensure the State is sufficiently remunerated, and further measures to limit distortions of competition.”

The EU has relaxed its usual rules against state aid as part of its response to the coronavirus pandemic, to allow governments to prop up businesses more easily. The French and Dutch governments are backing a bailout of roughly €10 billion for Air France-KLM.

Mr O’Leary has been outspoken in his criticism of state assistance to airlines, as governments scrambled to stop the industry going under as the coronavirus pandemic grounded flights and halted international travel.

Supporters of the bailouts argue that airlines must be supported as without them many other businesses would fail, such as in the tourism industry.

Mr O’Leary has previously accused Lufthansa of “hoovering up state aid like the drunken uncle at the end of a wedding, drinking from all the empty glasses”, and complained that bailouts are rescuing airlines that were already weak before the pandemic and distorting competition in Europe.

Ryanair has also written to the office of Ms Vestager accusing Lufthansa’s Italian subsidiary Air Dolomiti of being involved in a price-fixing cartel with Alitalia, Neos and Blue Panorama.

In Italy “where Lufthansa has its subsidiary, we have that subsidiary talking about getting together with three other airlines to discuss and maybe agree what price levels they may feel comfortable at,” Ryanair’s chief legal officer Juliusz Gomorek told reporters.

“In Austria, where Lufthansa has a subsidiary, in the context of the bailout of that subsidiary, we have government officials talking about potentially introducing minimum prices,” he added.

The commission confirmed it had received the complaint from Ryanair, and that it would be examined.

Lufthansa did not respond to a request for comment.