Swissport will not rule out future job losses at Irish airports

Airport ground handler is seeking 4,100 cuts in UK, about half its workforce there 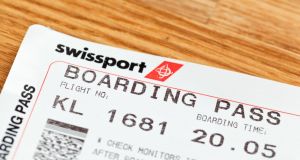 Swissport is seeking to cut 4,100 posts across the UK, around half its entire workforce in that jurisdiction. Photograph: Getty Images

Airport ground handler Swissport has not ruled out future job losses at its operations in the Republic following news that it is seeking more than 4,000 layoffs in Northern Ireland and Britain.

Up to 280 jobs were reported to be at risk in the North. Swissport is seeking to cut 4,100 posts across the UK, about half its entire workforce in that jurisdiction.

Meanwhile, Tony Tully, Swissport vice president responsible for its operations in the Republic, told staff in a letter that the company was in talks with trade union Siptu.

Swissport employs about 800 people in Cork, Dublin and Shannon airports. Mr Tully said that the company would be writing to all staff to inform them of the outcome of talks with the union and the options available to the company.

He noted that Government supports here had allowed Swissport extra time to consider the options for ensuring that the company saved as many jobs as possible in the Republic.