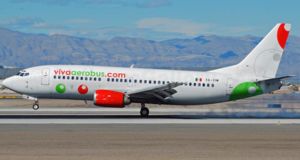 Low-cost Mexican airline VivaAerobus, which is part-owned by the Ryan family via its Irelandia Aviation investment vehicle, plans to float on the Mexican stock exchange.

Dubbed the Ryanair of Mexico, the carrier, which launched in 2006, operates 49 routes across Mexico, and one US international route from its Monterrey base to Houston, Texas.

Passenger traffic grew at an average annual rate of 17 per cent between 2007 and 2012, and last year its fleet of 19 planes transported a record 3.8 million passengers.

This week’s flotation announcement follows the carrier’s $5.1 billion order in October for 52 Airbus SAS A320 jets, the biggest aircraft order in Latin American history and one which will see the carrier triple in size over the next eight years.

The Ryans co-own 49 per cent of the airline in conjunction with another private investor, with the remaining 51 per cent of the busiuness held by Mexican bus company IAMSA.

The airline has hired Barclays, Grupo Financiero Banorte and HSBC Holdings to handle its initial public offering, which will involve existing and new shares.

The company’s preliminary prospectus, filed with the Mexican stock exchange, did not provide the date or the size of the offering.

However, industry sources suggest the share sale could come as early as next month and aims to raise approximately $135 million in funds to support further fleet expansion and network growth.

The prospectus claims previous carriers backed by Irelandia Aviation – such Allegiant in the US and Tiger Airways in Singapore – generated average returns of 22 per cent following their IPOs.