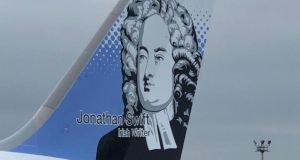 Norwegian Air’s new Dreamliner with Jonathan Swift on the tailfin

Air Canada has increased its offering from Dublin to Toronto to a full-service year-round service. Business travellers will also be able to use the carrier’s new lounge in Toronto Pearson Airport. The Air Canada Signature Suite has a full-service restaurant with a menu designed by chef David Hawksworth. The 6,400sq ft suite opened last week and is close to the international departure gates.

Citystasher has opened two new left-luggage Stashpoints in Dublin. They are at Mailboxes on Rathmines Road, Dublin 6 and on James Joyce Street, Dublin 1. It costs €5 for 24-hours and there is also insurance up to €750 per bag stored. Citystasher has locations in London, Amsterdam and Paris. Book your bag for storage in advance on citystasher.com.

American Airlines has reached an agreement with its pilots’ union to avoid cancelling thousands of flights during the Christmas period. A scheduling glitch had left thousands of flights without a captain, co-pilot or both between December 17th and December 31st at dozens of airports. The airline and the Allied Pilots Association had disagreed how to overcome the problem. But American said on Friday last that the two sides “have put that worry to rest to make sure our flights will operate as scheduled”. The union said it withdrew a grievance after reaching an agreement in principle. Union spokesman Dennis Tajer said details will be released after the pilots see the deal. American, the world’s biggest airline, expects to operate more than 200,000 flights in December. One analyst estimated that American Airlines will pay about $10 million to fix the pilot scheduling mix-up.

Norwegian is keeping its fleet younger and greener with the delivery of its 150th Boeing since 2008. This year it took delivery of 32 aircraft, some of which are being used on the carrier’s Ireland-US routes. The new aircraft is a 787-9 Dreamliner and has the image of Irish writer Jonathan Swift on the tailfin. Already Norwegian has been phasing out aircraft and the total fleet is now 145. Maybe we will see Swift on a route to Dublin in the future.