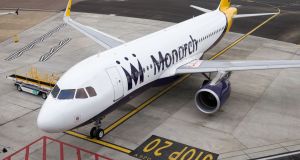 British Airways-owner IAG has snapped up prized take-off and landing slots at Gatwick Airport put up for sale by the administrator of collapsed airline Monarch in a multi-million pound deal. Photograph: Steve Parsons/PA Wire

International Airlines Group has secured the majority of Monarch’s take-off and landing slots at Gatwick airport, according to Press Association.

Monarch administrator KPMG won the right to sell the slots last week, which it claimed were its most valuable assets and could be worth up to £60 million. Several airlines, including Easyjet, Wizz Air and Norwegian, had expressed interest in buying the failed carrier’s slots in London. According to the Independent, IAG has confirmed the purchase but has not said how much it paid. The group says the slots will primarily be used by British Airways to launch new destinations and increase frequency on existing routes.

Air Canada today unveils an exclusive suite at Toronto Pearson Airport. The Air Canada Signature suite provides premium passengers with a luxury experience and elevates Air Canada into the ranks of leading global carriers. The lounge is open to all travelling on full-fare business class excluding upgrades and most point redemption programmes. The suite can accommodate up to 160 passengers, with a full service restaurant and cocktail area. There will be exclusive works of art by local Montreal artists Pascale Girardin and Nicolas Ruel.

Air Canada is not the only airline opening a new lounge this week. Qantas will be welcoming guests to their new lounge at Heathrow as it counts down to its non-stop Dreamliner service between London and Australia. Qantas has spent the last 12 months building the dedicated lounge. Ceo Alan Joyce said that investing in the first dedicated Qantas Lounge at Heathrow was key as the airline prepares for more direct links between Europe and Australia. The lounge will have seating for 230 people and sweeping views of the airfield.

Air France, KLM and Jet Airways of India have signed an enhanced co-operation agreement to help develop operations between Europe and India. It will be the first co-operation of its kind on the India-Europe route. The enhanced agreement will offer guests great choice, connectivity and comfort across the networks. The airline will work together to develop commercial and product offerings for customers.