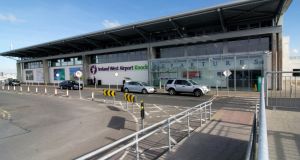 The Mayo facility, more commonly known simply as Knock airport, surpassed the previous record of 750,000 passengers set the previous year with an increase of 3 per cent in 2018 to 771,619 passengers.

A strong performance across the airport’s range of UK services fuelled growth, with Aer Lingus carrying 82,000 passengers on the London Gatwick service and Flybe posting strong passenger numbers on its Birmingham, Edinburgh and Manchester routes.

This year is forecast to be another record year for the facility, boosted by Ryanair’s new service to Cologne in addition to an increase in capacity on its Barcelona service from April. A spokesman previously told The Irish Times the facility expects to carry 800,000 passengers in 2019.

Knock airport will begin work on a runway overlay in May this year which will also see the installation of new ground lighting systems. Further work to be undertaken this year includes upgrade and enhancing the airport’s departures area.

“We are delighted to have had a record year in 2018,” Ireland West’s chairman Arthur French said. “This is the third successive year of growth at the airport with almost 100,000 extra passengers using the facility since 2015.”

It is the State’s fourth-largest airport with more than double the passenger numbers of Kerry airport but fewer than half that of Shannon airport.

1 ‘I’m so lucky to be in the Caribbean – a million miles from Derry Girls’
2 Joint accounts: if one of us dies, can the other access the money?
3 ‘The recovery needs to be a full-scale economic renewal’
4 Ryanair expects air fares to fall when flights take off again
5 Tax and the Pandemic Unemployment Payment: Your questions answered
6 Ireland’s recovery is partially due to us learning our lesson
7 Elon Musk’s Starlink could take wonders of night sky away from us
8 Listen to the cookies following you around on the web
9 Ireland’s top tech companies: who pays the most?
10 No guarantee Irish banks have learned lessons from tracker scandal
Real news has value SUBSCRIBE