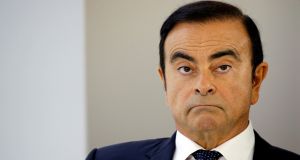 Ousted Nissan chairman Carlos Ghosn is set to appear in a Tokyo court on Tuesday after he requested an open hearing to hear the reason for his continued detention.

It would be Mr Ghosn’s first public appearance since he was arrested on November 19th on allegations of financial misconduct. He has been detained since then and has also been re-arrested over further allegations.

The hearing will take place on January 8th, the court said on Friday.

Earlier this week, the Tokyo District Court approved an extension to Mr Ghosn’s detention until January 11tg, after re-arrest by prosecutors who accuse him of aggravated breach of trust in transferring personal investment losses to Nissan.

The allegations centre on the use of company funds to pay a Saudi businessman who is believed to have helped him out of financial difficulties, sources said last week.

Mr Ghosn has already been charged for allegedly under-reporting his income. He has denied the allegations, local media has said. The reason behind the timing of the request for a court hearing was not clear.

Former Nissan executive Greg Kelly, who has been charged with conspiring to under-report Mr Ghosn’s income, has been released on bail after the court ruled against extending his detention while he awaits trial.