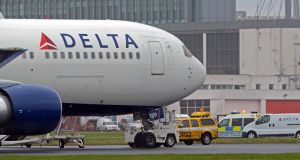 Delta: Shares in the airline company were down 9 per cent by mid-morning in New York, American Airlines shares fell 8 per cent. Photograph: Eric Luke

Delta Air Lines sent US airline stocks sliding on Thursday, after warning that fourth-quarter revenues would be lower than forecast and reviving investors’ concerns that the industry will struggle to keep raising ticket prices.

The carrier predicted that adjusted unit revenue for the fourth quarter would rise 3 per cent, compared with prior guidance of 3.5 per cent, and an initial guidance range of 3 per cent to 5 per cent.

Investors worried that revenues will weaken in 2019 in an industry that has been notorious for profit-sapping price competition. Shares in Delta were down 9 per cent by mid-morning in New York, American Airlines shares fell 8 per cent and United Continental dropped 5 per cent.

“The overall demand environment remains healthy with strength in both business and leisure segments throughout the quarter,” Delta said in an investor update, but it added a note of caution on the pace of ticket price rises at the end of last year.

“While close-in yield momentum continues, the pace of improvement in late December was more modest than anticipated.”

But investors focused on the expected decline in unit revenues.

Helane Becker, an airline analyst at Cowen, wrote in a note: “This is exactly why investors are apprehensive about getting involved in the group in a declining fuel environment. In the past, the airlines have competed away gains from lower fuel as they reward customers with lower fares. With oil trending lower in recent months, investors are worried this time will not be different.”

Delta said it expected its non-fuel unit costs to be down approximately 0.5 per cent year-on-year due to cost control and fleet changes.

“Investors must have been hoping for a large EPS beat for the fourth quarter,” instead of the slight increase that Delta gave in its investor update, he wrote in a note.

2 Online banking: Are we getting less but paying more?