Profits jump at Kelly’s in Rosslare as confidence returns 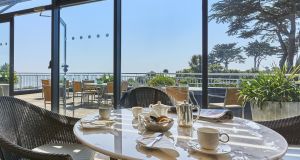 Profits at the four-star Kelly’s Resort Hotel in Rosslare increased by 12 per cent in 2016 as a “bit more confidence” returned to the economy, the company said.

Bill Kelly, who runs the hotel with his daughter Laura Kelly, said increasing confidence meant people were willing to spend money on time away. He said this is reflected in the hotel’s occupancy rates which ran at “around 92 per cent”.

As for 2017, Mr Kelly said he expected that growth wouldn’t be as significant because the hotel opened later in the year due to a significant project on the kitchen in the resort. On the whole, Mr Kelly estimated the company had spent around €3 million in capital projects over the last few years.

“It has been a number of challenging years so we continued investing throughout the period of the recession and that gives us confidence [in our product],” he said.

As to whether Brexit could pose challenges for the company, Mr Kelly said that it hasn’t had a noticeable effect so far and he doesn’t anticipate it having a negative impact on Kelly’s despite the UK being one of the company’s core markets.

While staff retention isn’t a huge issue for the company, it paid Mr Kelly and his mother, Breda, €1.15 million last year to buy apartments for staff.

“In Rosslare there’s a lot of pressure in terms of rental accommodation, especially in the summer, and it can be expensive for staff members to rent in the locality,” said Mr Kelly.

1 Should my mam wait for house prices to drop before buying?
2 McCanns’ Balmoral sees property value hit from Covid-19
3 Pilita Clark: Why we’re about to learn if we are really in the A-team
4 Irish whiskey sales near milestone of 12m cases a year
5 Hard-hit SMEs get ‘paltry’ €11m worth of loans under State scheme
6 ‘I have a talent for justifying purchases’
7 ‘I’m so lucky to be in the Caribbean – a million miles from Derry Girls’
8 Military-style planning can help businesses battle Covid-19 survival threat
9 Chris Johns: Past is another country when it comes to our post-pandemic future
10 US ‘hard seltzer’ drink White Claw launches in Ireland
Real news has value SUBSCRIBE