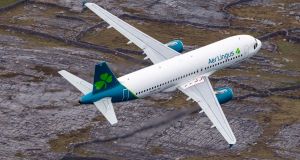 Passenger growth at Aer Lingus included the full year impact of routes to Philadelphia and Seattle launched in 2018.

Operating profit before exceptional items at Aer Lingus owner IAG was down more than a third in the first half of the year, the company’s financial results show.

In contrast, IAG recognised an exceptional gain of €678 million last year due to the closure of British Airways’ NAPS and BARP pension schemes.

There was also an exceptional charge of €58 million related to the continuation of British Airways’ “transformation initiatives”.

Profits at Aer Lingus for the half year were down 25 per cent to €78 million from €104 million last year.

British Airways made a profit of €873 million before exceptional items as compared with €868 million in 2018.

Elsewhere, Iberia made a profit of €109 million which was up slightly on the €102 million it made the year before, while Vueling’s profit was €5 million, up from a €11 million loss.

Taking the second quarter, IAG made an operating profit of €960 million before exceptional items, which was up from €816 million last year.

Passenger unit revenue for the second quarter was up 3.1 per cent, or 1.1 per cent at constant currency basis.

IAG chief executive Willie Walsh said it was a “good performance” from the company.

“Despite fuel cost headwinds, we delivered a good performance,” he said. “At constant currency, fuel unit costs were up 6.3 per cent while passenger unit revenue increased 1.1 per cent, benefitting from the timing of Easter.

“This highlights, once again, that our unique structure and diverse brand portfolio underpins our financial resilience and ability to deliver robust results.”

In terms of its trading outlook, IAG said that at current fuel prices and exchange rates, it expects its 2019 operating profit before exceptional items to be in line with 2018.

In the first six months of 2019, IAG capacity, measured in available seat kilometres (ASKs), was higher by 5.7 per cent with increases across all regions. ASKs are the number of seats available multiplied by the number of miles or kilometres flown.

Passenger revenue at Aer Lingus was €939 million, which was up from €867 million the year before. Its growth included the full year impact of routes to Philadelphia and Seattle launched in 2018.

Vueling increased its capacity through new routes and additional frequencies across its domestic market, with Balearic and Canary Islands “performing well” throughout 2019.

Iberia increased its capacity primarily through additional frequencies on its Latin and North American routes, in particular Mexico, Chile and New York.

British Airways increased capacity through additional frequencies, primarily in Latin America and the Caribbean, together with new destinations, including flights to Charleston, Pittsburgh and Osaka from London Heathrow.

IAG’s cash position of €8 billion was broadly in line with last year. Net debt at the end of the period, including the debt associated with right of use assets, was €4.8 billion.

Aer Lingus held €42 million of restricted cash, down from €44 million for the same period last year.

Time running out for those wanting to avail of SBCI ‘future growth’ loans 17:35
Profits rise 22% at Gucci Ireland 17:22
EasyJet sees improvement in first half on robust demand for flights 17:22
Disney Plus and Baby Yoda available to Irish subscribers the week after St Patrick’s Day 16:47
Swiss police suspect Davos plumbers of being Russian spies 16:24

1 Who are Ireland’s 17 billionaires?
2 My father in a nursing home wants to gift me his house
3 State subsidises public sector retirees to cover gap until State pension
4 Swiss police suspect Davos plumbers of being Russian spies
5 Are there annual limits on inheritances or gifts to a child?
6 Corporate tax change is inevitable, says Donohoe
7 Insolvency arrangement approved for man with €60 million in debts
8 Countries that fail to attract immigrants will lose out – Microsoft chief
9 Q&A: Why has the pension age question suddenly become an election issue?
10 Domino’s Pizza spared costs despite losing appeal
Real news has value SUBSCRIBE