EasyJet sees improvement in first half on robust demand for flights 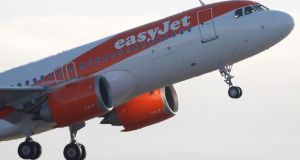 The collapse of Thomas Cook last September accounted for almost a fifth of the 8.8% gain in revenue per seat at EasyJet in the December quarter. Photograph: Reuters/Phil Noble

Low-cost airline EasyJet said its loss over the winter low season is set to shrink as the collapse of tour operator Thomas Cook pushes more customers its way.

The stock rose the most on the FTSE-100 index on Tuesday after EasyJet said the shortfall for the six months through March is likely to be smaller than last year’s £275 million loss. Robust demand and lower capacity levels at competitors have bolstered fares, the airline said.

The collapse of travel giant Thomas Cook last September accounted for almost a fifth of the 8.8 per cent gain in revenue per seat in the December quarter, chief executive Johan Lundgren said on a conference call. The former TUI manager founded a new EasyJet Holidays division in November.

EasyJet follows Irish rival Ryanair in issuing positive guidance after a difficult year forced a clutch of operators into bankruptcy, with Thomas Cook the highest-profile casualty.

The grounding of Boeing’s 737 Max will limit Ryanair’s expansion this coming summer, meaning the UK airline is well-placed to pick up extra demand, according to Sanford C. Bernstein.

“Capacity growth looks moderate for this environment,” said analyst Alex Irving. “With Thomas Cook, the Max and the rest, why not go faster?”

Mr Lundgren is currently targeting a 3 per cent seating increase over the year.

Shares advanced as much as 5.7 per cent, and closed 4.6 per cent higher in London, the best performance on Britain’s benchmark index after stocks slumped worldwide amid concerns about the economic impact of a outbreak of coronavirus in China.

EasyJet founder Stelios Haji-Ioannou, owner of a 34 per cent stake, said in a statement on Tuesday that while he supports the airline’s capacity restraint, he plans to make a “token vote” against the re-election of chairman John Barton at this year’s agm to communicate his desire for a stronger focus on earnings growth.

He said he wanted the company to set a target of 200 pence in earnings per share by 2021. Analysts tracked by Bloomberg forecast 113 pence.

Mr Lundgren said that three-quarters of seats for the fiscal first half have been booked – just over 1 percentage point ahead of the same time last year.

Revenue per seat is now forecast to gain by a mid to high single-digit percentage in the six months through March, after the carrier previously pointed to a low to mid single-digit increase.

First-quarter sales advanced 9.9 per cent to £1.43 billion as the passenger tally rose 2.8 per cent.

Mr Lundgren also said on the earnings call that the company was engaging with the government regarding the controversial rescue of rival airline Flybe.