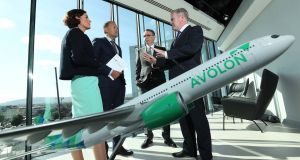 Avolon, in its 2020 outlook paper, said airlines and passengers ‘will turn up to fly’ in the coming year

The company, in its 2020 outlook paper, said airlines and passengers “will turn up to fly” in the coming year despite the fact Boeing’s fastest-selling aircraft has not flown since last March following two crashes which claimed 346 lives.

“Trading markets will re-open and values will be supported by strong demand for Boeing’s most popular product,” said Avolon. “The world needs more Boeing aircraft to support growing demand for air travel.”

The company also predicted that no new major commercial aircraft programmes will be launched.

The year will also see the aviation industry “get serious about the environment” with an increasing number of concrete proposals to meet the 2050 industry goal of a reduction in net aviation carbon emissions of 50 per cent, compared to 2005 levels.

“In 2020, urban mobility solutions will demonstrate electrification of air travel is feasible, if at first only on short sectors,” the report noted.

“Flight shaming” was a “meaningful drag on growth” for air travel in Northern Europe during 2019, with Sweden experiencing its first year-over-year decline in capacity since the financial crisis.

Nearly 200 electrically propelled aircraft projects are in varying stages of development around the world, with the promise to revolutionise urban mobility.

Hybrid solutions “may offer the next step-change efficiency improvement for inter-city travel”, Avolon said. However, neither technology is expected to be ready for mass adoption in the near- to medium-term.

The grounding of the 737 Max resulted in about 1.5 million tonnes of extra CO2 emissions last year that would have been avoided if new aircraft flew instead of old. This was the carbon equivalent of 1.8 million additional passengers flying New York to Paris return.

With fuel prices on the rise in the early rounds of 2020, unhedged airlines will be challenged. Airlines will conserve cash to protect their balance sheets, preparing for the downturn that didn’t come during the last decade.

“Through this turbulence will emerge opportunity,” he said. “While improved airline profitability is forecasted, many sizeable carriers remain on life support.

“For lessors, investment-grade rated players with global platforms are best positioned to seize any opportunities that may be presented.

“While efficiency improvements have long been a hallmark of aviation, 2020 is set to be the baseline year for the sector’s carbon emission offsetting and reduction scheme, which will transition air travel to carbon-neutral growth.”