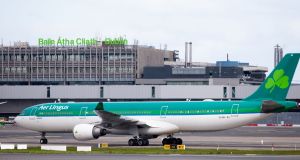 Aer Lingus is planning daily flights to Malaga on Spain’s Costa del Sol, Lanzarote in the Canary Islands and Faro in Portugal as Covid-19 restrictions are lifted. Photograph: Tom Honan

News of a possible deal with unions came as details were revealed of Aer Lingus’s plans to begin flying to Spain and several other European centres from July 1st as coronavirus travel bans ease.

The Irish airline has been in talks with unions, including Siptu and Fórsa, to hammer out a deal to aid it in surviving the Covid-19 crisis, which has grounded flights for three months.

A document agreed by Aer Lingus and union officials shows the airline is willing to row back from proposals to cut pay temporarily to 30 per cent of normal levels until August, from its current 50 per cent.

The airline is also prepared to reverse plans to temporarily lay off staff in Shannon Airport from June 21st, when the Government Covid-19 payment scheme is scheduled to end. The final number of lay-offs at the midwestern airport is not clear.

In return, staff must agree to wide-ranging work practice changes that will stay in place until at least February 2022. Workers have yet to vote on the compromise, which hinges on their agreement.

Aer Lingus would not comment on the document on Friday. The airline said that talks with the Irish Congress of Trade Unions (ICTU) and the group of unions representing Aer Lingus staff “were at an advanced stage”.

None of the unions involved commented. It is understood that their existing agreements with the company provide for various work practice changes.

The deal would run to February 28th, 2022 and includes provisions to recognise workers’ efforts with a payment or salary increase, tied to the airline’s financial performance in 2021. The company employs about 4.500 people.

Aer Lingus cut staff pay by 50 per cent across the board from April. Workers are receiving the Government’s Covid-19 pay supports, which are administered by the Revenue.

The carrier will hope that it can complete a deal with unions ahead of July 1st, when it has plans to resume some services, along with others in International Consolidated Airlines Group (IAG), its parent.

Aer Lingus is planning daily flights to Malaga on Spain’s Costa del Sol, Lanzarote in the Canary Islands and Faro in Portugal.

It is also weighing flights several days a week to Paris, Rome, Palma, also in the Canaries, and Alicante on the Costa Blanca.

These schedules provisionally run from July 1st with takeoffs mainly set for the morning. However, sources say that the situation remains fluid.